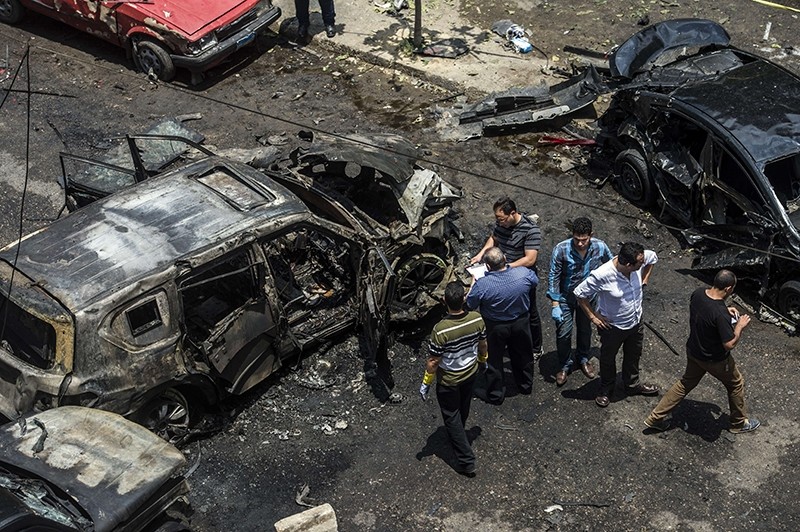 Forensic detectives gather at the site of a bomb that targeted the convoy of the Egyptian state prosecutor, Hisham Barakat, in the capital Cairo on June 29, 2015. (AFP Photo)
by Anadolu Agency Jun 17, 2017 12:00 am

An Egyptian court on Saturday sentenced 30 people to death in connection with the 2015 assassination of the country's prosecutor-general, according to a local judicial source.

Prosecutor-general Hisham Barakat was killed in a car bomb attack on his convoy in eastern Cairo in June 2015.

The 30 defendants were among a group of 67 people accused of involvement in the attack, the source said on condition of anonymity because he was unauthorized to speak to media.

Saturday's sentences were referred to Egypt's grand mufti for a non-binding opinion, as required by Egyptian law.

The defendants were convicted of premeditated murder, association with a terrorist organization and being in possession of weapons and explosives.

The court will confirm the verdicts on July 22.

Egyptian authorities have accused the Muslim Brotherhood movement and Palestinian group Hamas of involvement in the attack, an accusation vehemently denied by both groups.

Egypt was roiled by turmoil when the military deposed Mohamed Morsi, the country's first freely elected president, in a 2013 coup.

Barakat was the highest official to have been killed in a militant attack since 2013.