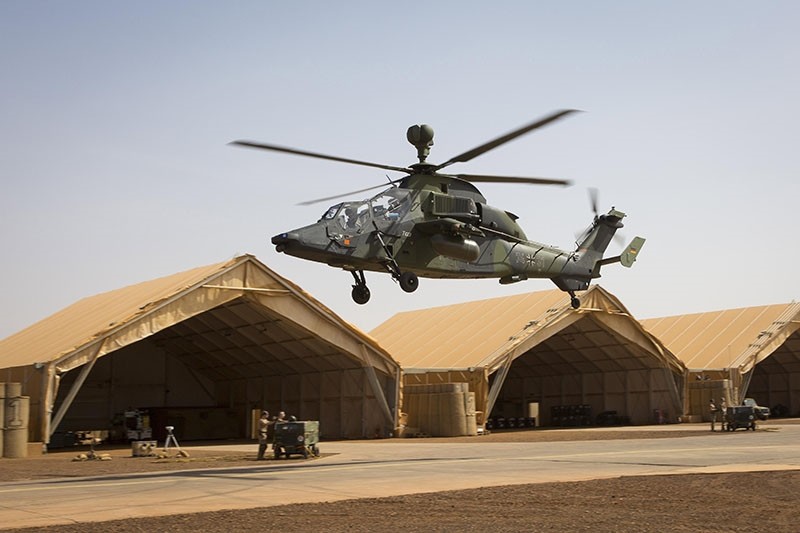 A handout photo made available by the German Bundeswehr armed forces shows a Tiger combat helicopter landing in a camp during MINUSMA mission in Gao, Mali, March 25, 2017. (EPA Photo)
by Compiled from Wire Services Jul 26, 2017 12:00 am

A German military helicopter assigned to the United Nations peacekeeping mission in Mali (MINUSMA) crashed in the West African nation's desert north on Wednesday, a spokesman for the mission said.

A statement from MINUSMA said the cause was likely a technical failure.

The helicopter was monitoring clashes on the ground when it crashed, a spokesman for UN Secretary General Antonio Guterres said, without providing further details.

Germany increased its commitment to MINUSMA earlier this year with the deployment of eight attack and transport helicopters as well as 350 additional soldiers.

It now has around 1,000 troops serving in Mali as part of MINUSMA and a separate European Union mission. The overall size of MINUSMA is some 12,000 troops.

The crash comes at a politically sensitive time in Germany with just weeks to go to a national election in which Chancellor Angela Merkel is seeking a fourth term.

Merkel's Social Democratic challengers have raised questions about increasing military spending to reach a NATO target of 2 percent of economic output, and recently blocked plans for leasing an armed drone to support German troops, for instance, in Mali.

Four years after a French-led military intervention drove militants linked to an ethnic Tuareg-led rebel uprising from cities and towns they had seized in in 2012, northern Mali remains racked by violence.

Militant fighters, some with links to Al-Qaida, regularly target Malian soldiers and U.N. troops in attacks that have made MINUSMA the world's deadliest U.N. peacekeeping mission.