Nealry 70 injured after storming border fence from Morocco into Spain 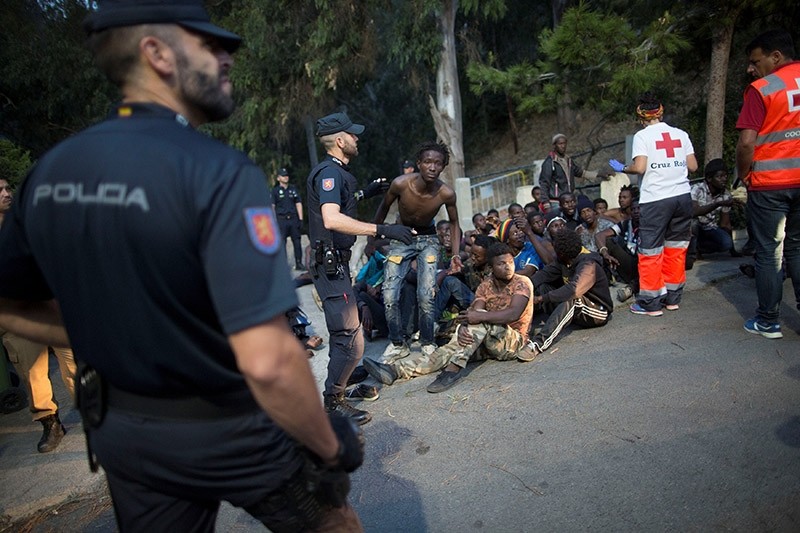 Police stand around a group of African migrants as Red Cross workers attend the injured after they crossed the border fence from Morocco to Spain's North African enclave of Ceuta, Spain August 1, 2017. (Reuters Photo)
by Compiled from Wire Services Aug 01, 2017 12:00 am

Around 70 sub-Saharan African migrants were injured when they tried to cross through the razor-wire-topped fence separating northern Morocco from the Spanish enclave of Ceuta on Tuesday, the Red Cross said.

Local police said 200 people rushed the border in a bid to reach Europe. Around 60 managed to enter the territory.

Ceuta and Melilla, also a Spanish territory in North Africa, have the EU's only land borders with Africa.

As a result, they are entry points for migrants desperate to get to Europe and who regularly try to climb the high border fences, swim along the coast or hide in vehicles.

The number of migrants entering Spain via Ceuta and Melilla more than doubled in the first six months of the year from the same period last year to 3,200 people, according to Spain's Interior Ministry.

Once within the enclaves, migrants are either returned to their country of origin or moved to the Spanish mainland, which many use as a jumping-off point for the rest of Europe.

The migrants used wire cutters to breach a gate, according to a spokesman from the Ceuta government. Between 1,000 and 1,500 people are camping out in the scrub and woods around the enclave waiting for the opportunity to rush the border, he said.

The Red Cross said 14 people had to be hospitalized.

The last major push in to one of the enclaves was in May when some 300 migrants attempted to jump the fence in Melilla. Around 100 successfully crossed the border.