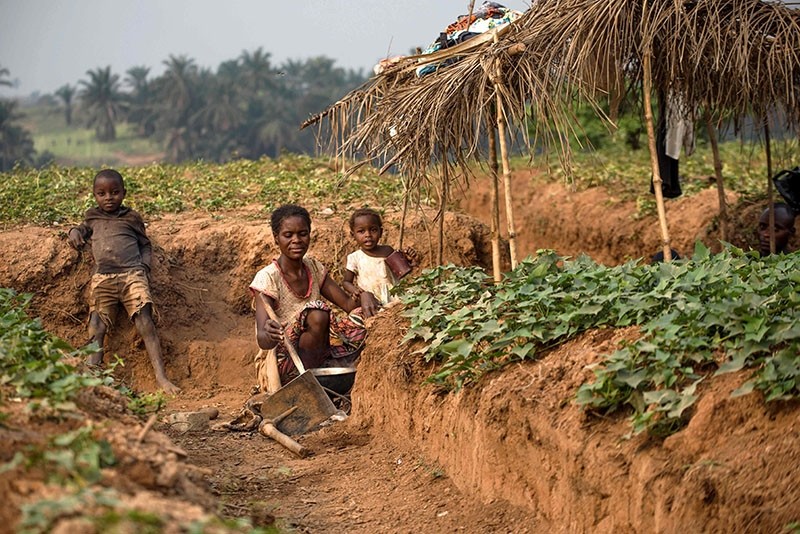 A Congolese woman and her children, who fled from rebel group attacks, sit in a field farmed with the help of the Food and Agricultural Organisation of the UN (FAO) in Tshikapa in the Kasai Region, D.R. of Congo, on July 27, 2017. (AFP Photo)
by Aug 04, 2017 12:00 am

The United Nations on Friday detailed more than 250 "extrajudicial or targeted killings" in the Democratic Republic of Congo's Kasai region from mid-March to mid-June, counting dozens of children among the dead.

The findings, based on interviews with refugees from Kasai who had fled to Angola, blamed state agents for the murders of seven children.

The refugees gave harrowing accounts of the violence in the region, which the UN warned had taken on "an increasing and disturbing ethnic dimension."

Victims recounted mutilations, including of a seven-year-old boy whose fingers were cut off, and an attack on a hospital in the village of Cinq where 90 people were killed, some because they were too injured to escape a raging fire.

Aside from government troops, the U.N. blamed a state-backed militia called the Bana Mura as well as the anti-government Kamuina Nsapu militia for a range of atrocities.

"Survivors have spoken of hearing the screams of people being burned alive, of seeing loved ones chased and cut down, of themselves fleeing in terror", the United Nations human rights chief Zeid Ra'ad Al Hussein said in a statement.

A team of U.N. investigators "was able to confirm that between 12 March and 19 June some 251 people were the victims of extrajudicial and targeted killings", the report said.

"These included 62 children, of which 30 were aged under eight," it added.

Regarding the children murdered, the UN said seven were killed by members of the army (FARDC) or the national intelligence service, while six died at the hands of the rebel Kamuina Nsapu.

The Bana Mura militia members blamed for the deaths of 49 minors.

"Some of the violations and abuses committed in the Kasais may amount to crimes under international law," the UN said in a statement.

The violence in Kasai erupted last September after the death in clashes of a tribal chieftain, known as the Kamwina Nsapu, who rebelled against the authority of President Joseph Kabila's regime in Kinshasa and its local representatives.

The killing sparked violence that has escalated, including gross alleged violations of human rights such as extrajudicial killings, rapes, torture and the use of child soldiers.

In less than a year, the violence has claimed more than 3,300 lives, according to a tally by the influential Roman Catholic Church, and displaced 1.4 million people.

Around 80 mass graves have been uncovered in the region.

Kabila's reluctance to organize elections has heightened tensions across the country, while the UN rights office has blasted his government for not mounting serious investigations into the Kasai crisis.