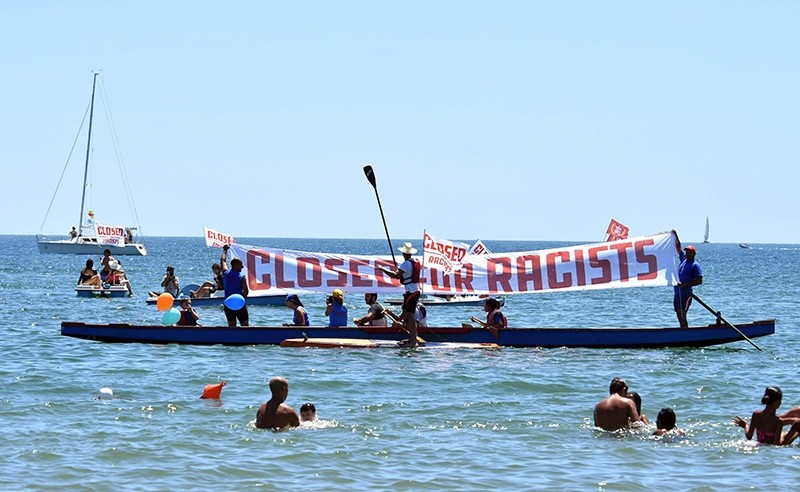 People hold banners and flags as they take protest against the scheduled arrival of the C-Star, a ship that an anti-immigrant group has chartered to try and halt migrant arrivals to Europe, in Catania, Sicily Island, Italy, July 29, 2017. (AP Photo)
by Aug 06, 2017 12:00 am

Tunisian fishermen vowed Sunday to block a ship carrying far-right activists from docking at their port, dealing a fresh blow to their mission to disrupt the flow of migrant boats from north Africa to Europe.

The C-Star, a boat chartered by anti-immigration group "Generation Identity", passed through waters off Libya on Saturday.

It briefly tailed the Aquarius, operated by French group SOS Mediterranee, one of several NGO boats conducting search and rescue operations in an area notorious for deadly migrant boat sinkings.

Having left Cyprus on August 1, the 40-meter (130-foot) vessel was thought to be in need of supplies: but the fishermen in the southeastern Tunisian port of Zarzi had other ideas.

"If they come here we'll close the refueling channel," Chamseddine Bourassine, the head of the local fishermen's organization, told AFP.

"It is the least we can do given what is happening out in the Mediterranean," he added.

"Muslims and Africans are dying."

An official at the port, who asked to remain anonymous, said: "What? Us let in racists here? Never!"

The C-Star headed straight from Cyprus to Libyan waters after being discouraged from attempting to dock en route in Greece and Sicily, with authorities concerned about the prospect of protests.

The self-styled "Defend Europe" mission has had a checkered history to date.

Their boat was held up for a week in the Suez Canal by Egyptian authorities looking for weapons.

Then, after it landed in the Cypriot port of Famagusta last month, several of its crew jumped ship and asked for asylum in Europe -- exactly the kind of thing the mission was set up to prevent.

The C-Star crew say their main goal is to expose collaboration between NGO rescue ships and the traffickers who launch boats packed with migrants from Libya.

Since the start of 2014, some 600,000 people from Africa, the Middle East and South Asia have been rescued from traffickers' boats and taken to Italy.

Over 10,000 have died en route and serial sinkings have resulted in privately funded or charity-run boats joining a multinational search and rescue operation coordinated by Italy's coast guard.

NGO boats have rescued around one third of the nearly 100,000 people picked up this year, but their relations with Italy have become strained as pressure to stem the flow of migrants has mounted.

Critics say the NGOs make it too easy for the traffickers to guarantee would-be migrants safe passage to Europe, allegedly fuelling the lucrative trade.

They accused its crew of being in direct contact with traffickers to organize pick-ups of boatloads of migrants from locations very close to the Libyan coast.

On Sunday, the Aquarius and Doctors without Borders (MSF) took part in a rescue operation in which around 100 people were plucked from a distressed dinghy.

The number of such rescues in international waters has fallen sharply over the last five weeks to under half the level of the same period last year.

Italian officials are cautiously optimistic that this reflects a breakthrough in their efforts to strengthen the Libyan coast guard's capacity to combat traffickers.

The Libyan navy told AFP that between Thursday and Saturday the coast guard, which has received training and new equipment from Rome, had intercepted five trafficker boats carrying a total of 878 people.

Rights organizations have voiced concern over the focus on sending boats back to Libya.

They say the migrants on board face detention in squalid camps and the risk of torture, sexual violence and forced labor.

Italian officials defend the strategy as the only way to end a humanitarian crisis threatening to overwhelm the country's reception facilities.