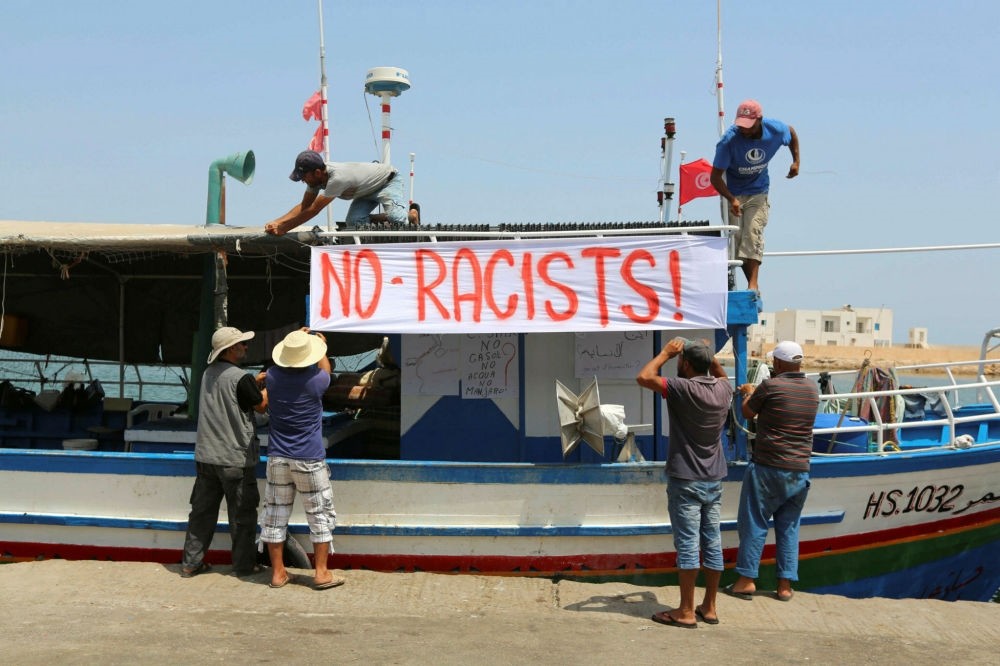 Tunisian fishermen hang banners in the port of Zarzis in southeastern Tunisia, Aug. 6.
by Angelos Berberakis
Aug 08, 2017 12:00 am

Fishermen at a Tunisian port prevented a ship carrying far-right, anti-immigration activists from docking, dealing a new blow to a controversial mission aimed at disrupting the flow of migrant boats from North Africa to Europe

They threatened to not let the controversial group's vessel refuel at the port, saying the group was a "closet racist."

While GI has its roots in France, and picked up a lot of steam after the first terrorist attacks in Paris in November 2015, it now has members and sister groups all over Western and Central Europe.

GI espouses "Identitarian" values, and as explained by them, that means a re-assertion of European identities, rather than a singular global identity.

Seen as "far-right" by many, no figureheads in the group have actually worded any racial hatred, but they are opposed to what they call the demographic replacement of European societies by the non-Western world.

While not so long ago the group was scaling famous monuments in Austria and Germany, such as the Brandenburg Gate in Berlin or the Vienna State Open House, brandishing massive banners reading such messages as "Secure borders – secure future" and "Hypocrites," over the past few months GI has been raising money to be able to operate a vessel in the Mediterranean Sea.

The C-Star is a crucial part of GI's "Defend Europe" mission. It was funded by individual donors on the internet. While GI had originally been asking for some tens of thousands of euros, it quickly surpassed $100,000 in donations and as of today has gathered nearly $200,000.

GI, as well as its mission, has been widely condemned by many of the NGOs with tens or even hundreds of millions in the bank. It was accused of wanting to sink the boats of those who cross the Mediterranean, as well as wage "naval warfare" against NGO ships. Not only are these sentiments unfounded, but they have been contradicted by, at first, the words and now the actions of the C-Star's volunteers.

Long before the vessel had even reached its destination, Martin Sellner, one of the founders of the youth movement's Austrian branch, had given an extensive interview to independent conservative journalist Lauren Southern explaining the mission objectives of Defend Europe.

"Of course we will not attack these vessels. We will only be there to oversee the activities of these vessels and to contact the Libyan coast guard if we get an SOS signal, for example. We are obliged to go there and save people by handing out rescuing rings and insuring that they are not in danger. […] We will not engage in any sea battles or things of that nature. We only aim to see that NGO-sponsored vessels do not breach any maritime laws." Sellner said.

He also talked about the possible criminal activities that other NGOs are engaging in. "Nobody talks about this. The trafficking rings are making millions because of the NGO ships. The presence of NGO ships and ferrying the migrants from the Libyan shore to Italy. […] We want to drain their resources by sinking the [abandoned] boats, which is also something that you're obliged to do according to maritime law."

GI, as well as the Italian Government, is accusing NGOs of ferrying illegal immigrants directly from coasts of war-torn Libya to Italian EU territory, which violates a number of national, international, as well as maritime laws and amounts to nothing more than human trafficking.

A boat from the German Jugend Rettet NGO has been impounded by Italian authorities on suspicion of communicating and conspiring with human traffickers in Libya. Information available on the internet proves a lot of NGO boats made and are still making trips, taking illegals from Libya to Italy.