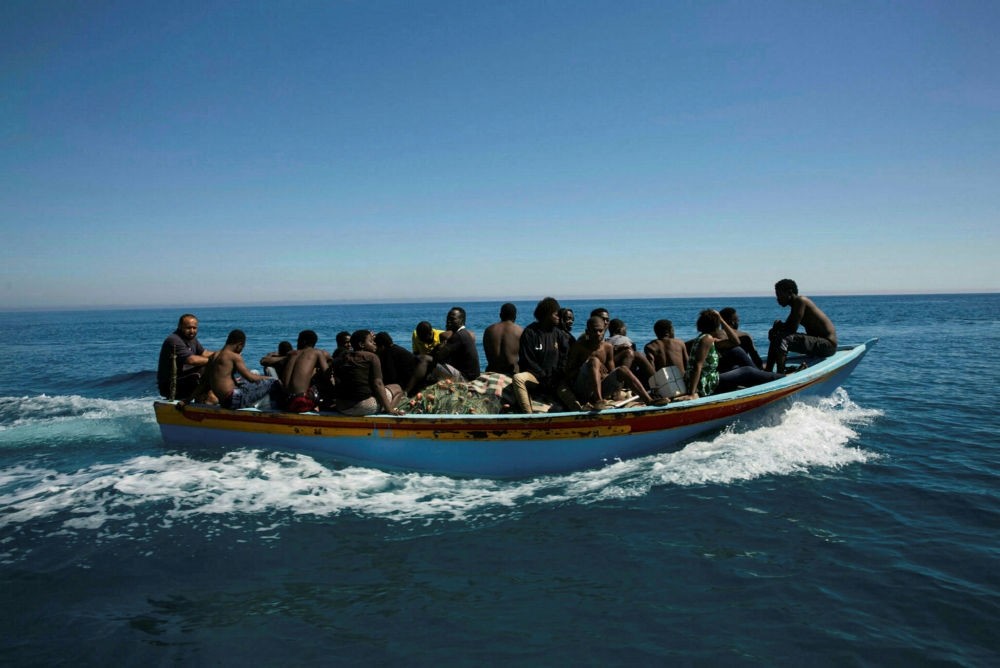 Migrants travel in a boat after they were rescued by the Libyan coast guard in the Mediterranean off the Libyan coast in Guarabouli, July 8.
by Compiled from Wire Services Aug 10, 2017 12:00 am

Oxfam called on Italy and other European countries to stop pursuing migration policies that prevent people from reaching European shores as many refugees risk being trapped in Libyan ‘living hell' where they suffer kidnappings, torture, sexual violence and slavery

The European Union should not hinder migrants from leaving Libya, where they are often subject to torture, slave labor and sexual violence, international charity Oxfam warned yesterday.

"Bringing them back to Libyan shores creates a vicious cycle where desperate people try repeatedly to escape abuse and death, and European forces prevent them from doing so," Oxfam said in a new report.

The charity recommended that the processing of asylum seekers be done in a "safe and secure" environment, with the burden spread across the 28-nation bloc. It also called on the EU to create more "safe routes" so they do not have to risk their lives.

Out of 158 migrants Oxfam spoke with in Sicily between October 2016 and April 2017, "the vast majority had experienced some form of degrading treatment" during their time in Libya.

All but one of the 31 women interviewed had been victims of sexual violence. Nearly three-quarters said they had witnessed the murder or torture of a travelling companion, while 84 percent said they themselves had suffered inhuman or degrading treatment.

Hamza, a 30-year-old from Morocco, said he nearly died after being abducted by a gang who tried to rape him. Hamza told Oxfam that they took him as he was walking down a street in Tripoli, put a hood over his face, and then demanded a ransom from his family as they held him captive in an underground location.

"They beat and wounded me several times with a knife. I still have the scars ... I was on the verge of dying because of the beatings I endured to resist the traffickers who wanted to rape me. They regularly raped men. I have seen all kinds of sexual violence."

The sea crossing from Libya to Italy, operated by people-smugglers based in the North African country, is now the main route for migrants bound for Europe. In Libya, the turmoil engulfing this North African country has become a death trap for thousands of migrants, most of them from sub-Saharan African countries, seeking to escape poverty and find a better life in Europe.

The political backlash resulting from the wave of migration has led the EU to take measures to prevent people from making the crossing in the first place. The Italian cabinet last month approved a naval mission in Libyan waters. It would deploy a large vessel and several smaller ships to intercept migrant boats, with the passengers taken back to Libya. Italy wants to keep tighter rein on NGOs helping the multinational search and rescue operation by making them sign up to a new code of conduct.

But the move, resisted by some organizations, has led to confusion with boats getting contradictory instructions and the government apparently split over the handling of what is a tricky issue. The code has been approved by the European Commission but a committee of the German parliament has questioned whether it is compatible with maritime law and its wide-reaching provisions on the duty of coming to the aid of ships in distress. Italian Interior Minister Marco Minniti had insisted there will be no cooperation with NGOs that don't sign the code.

Libya, the oil-rich North African country, descended into chaos after Western intervention, and parts of it have become a bastion for Daesh, giving the militants a new base even as its territory in Syria and Iraq shrinks under constant assault. Five years after Libyan leader Moammar Gadhafi was toppled by NATO intervention, the country has become the main jump-off point for migrants heading for Europe, and the breeding ground for militants as there is no security or stability left in the war-torn country.