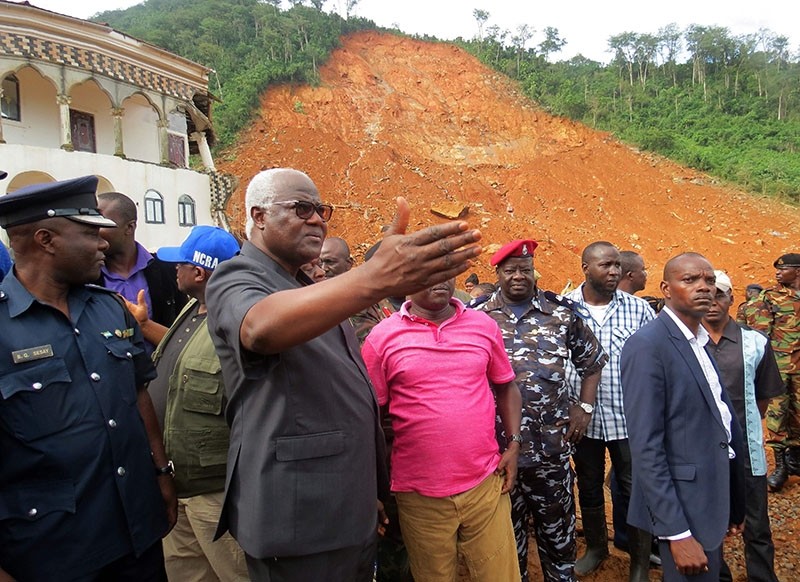 Sierra Leone president Ernest Bai Koroma (2nd-L) visits the site of a mudslide near Freetown on August 15, 2017, after landslides struck the capital of the west African state. (AFP Photo)
by Compiled from Wire Services Aug 15, 2017 12:00 am

The death toll from massive mudslides in Sierra Leone's capital was certain to rise Tuesday as bodies washed up on a beach and workers searched for an untold number of people buried in their homes. The Red Cross estimated that 600 people were still missing.

Authorities have said more than 300 people were killed in and around Freetown on Monday following heavy rains. Many were trapped under tons of mud as they slept. 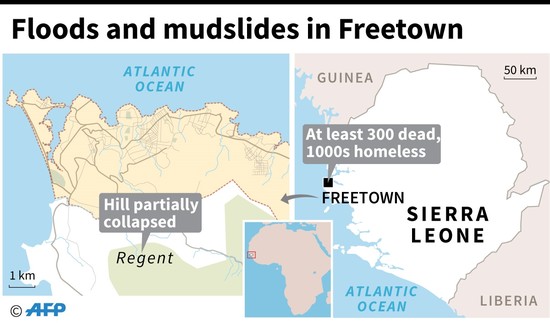 The Connaught Hospital mortuary in central Freetown was overwhelmed on Tuesday with more than 300 bodies, many spread on the floor.

Red Cross spokesman Patrick Massaquoi told AFP on Monday that the death toll was 312, but another Red Cross official, Abu Bakarr Tarrawallie, put the death toll at 245 in an email to AFP on Tuesday, while local media and officials all gave different tolls.

"The magnitude of the destruction as a result of the disaster is such that the number of victims in the community who may not come out alive may likely exceed the number of dead bodies already recovered," said Charles Mambu, a civil society activist and resident of one affected area, Mount Sugar Loaf.

In a sign of hope, he said, "two bodies were brought out alive from the debris last evening."

Government spokesman Cornelius Deveaux said rescue operations began early Tuesday to remove people still believed to be buried in the rubble. Heavy equipment was deployed to dig into the piles of red mud.

Deveaux said definitive death figures were unknown "as the mortuary is overwhelmed with corpses — men, women and children."

Many bodies were in a horrible state, missing arms, heads or legs, Deveaux said, adding that proper burials will be vital in keeping disease at bay. "Contingency plans are being put in place to mitigate the outbreak of disease like cholera," he told a local radio station, FM 98.1.

Sulaiman Parker, the environmental protection officer in the Freetown City Council, said bodies will be buried in the next 48 hours.

Some rescue workers and volunteers dug overnight through the mud and debris with their bare hands in a desperate search for missing relatives. Military personnel have been deployed to help with the operation in the impoverished West African nation.

"I have never seen anything like it," said Abdul Nasir, program coordinator for the International Federation of Red Cross and Red Crescent Societies. "A river of mud came out of nowhere and swallowed entire communities, just wiped them away. We are racing against time, more flooding and the risk of disease to help these affected communities survive and cope with their loss."

An estimated 9,000 people have been affected, Nasir told The Associated Press.

Many of the impoverished areas of Sierra Leone's capital are close to sea level and have poor drainage systems, exacerbating flooding during the rainy season. Freetown also is plagued by unregulated building of large residential houses in hilltop areas.

Thousands of makeshift settlements in and around the capital were severely affected.

"The government has been warning people not to construct houses in these areas. When they do this, there are risks," Nasir said. "People don't follow the standard construction rules, and that is another reason that many of these houses have been affected."

Deforestation for firewood and charcoal is one of the leading factors of worsening flooding and mudslides.

Addressing the media in Regent, one of the areas hit hardest by the flooding, President Ernest Bai Koroma fought back tears as he said the devastation "was overwhelming us".

"Entire communities have been wiped out," Koroma said at the disaster site, where heavy rains streaming down the hill caused a landslide and engulfed homes three or four storeys high on Monday, many of them built illegally.

The government has promised relief to the more than 3,000 people left homeless, opening an emergency response center in Regent and four registration centers.

Israel and Britain said they were sending aid as quickly as possible to the stricken west African city of around one million people.

"There is a challenge of expertise in search and excavation and inadequate machines to excavate the submerged houses," Tarawallie added. "Registration of affected people is ongoing now to ascertain total number of affected people later on."

Sierra Leone's meteorological department issued no warning ahead of the torrential rains, which might have allowed for swifter evacuations from the disaster zones, AFP's correspondent based in Freetown said.

At the city's military hospital, community health officer Wilberforce Mohammed Rogers said he had treated several children with multiple injuries, including a six-month old baby. Many had lost their parents, Rogers said.

An AFP journalist met victims sleeping in schools, community centers and out in the open, while others squeezed into homes of relatives.

Israel's foreign ministry said it would provide "assistance immediately and in every way possible" including clean water, medicines and blankets.

British International Development Secretary Priti Patel said she was "deeply saddened" by the devastation and the loss of life.

London was "already working with the government of Sierra Leone to coordinate the rescue efforts and are ready to provide further assistance to those in need".

The United Nations children's agency (UNICEF) is providing trauma counselling and therapy to families and children in the dozen-odd communities struck by the mudslide.

"You can see people openly grieving ... there is a lot of hurt to address," said UNICEF spokesman John James.

Freetown is hit each year by flooding during several months of rain, raising the risk of waterborne diseases such as cholera.

Flooding in the capital in 2015 killed 10 people and left thousands homeless.

Sierra Leone was one of the west African nations hit by an outbreak of the Ebola virus in 2014 that left more than 4,000 people dead in the country, and it has struggled to revive its economy since the crisis.

The country ranked 179th out of 188 countries on the UNDP's 2016 Human Development Index, a basket of data combining life expectancy, education and income and other factors.