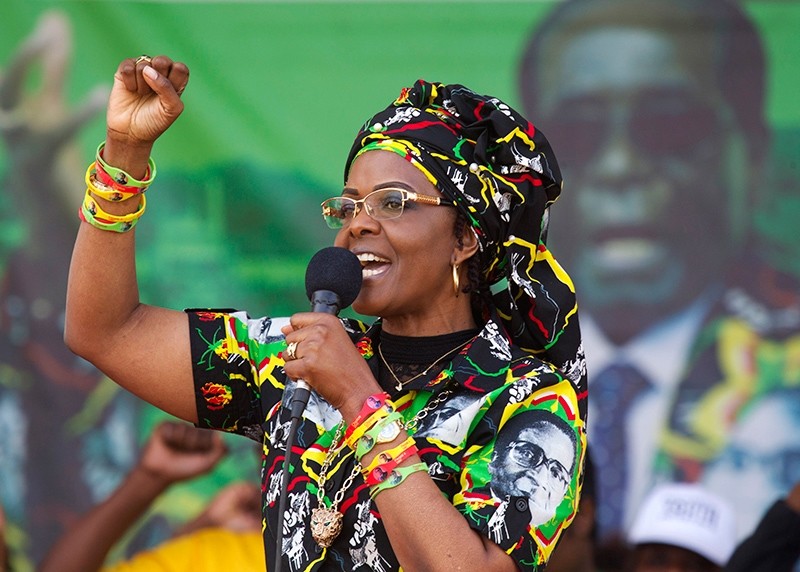 Zimbabwean first lady Grace Mugabe's whereabouts were not known on Tuesday, a South African police spokesman said, correcting the police minister who earlier claimed that she had handed herself in to police.

"The negotiations over the suspect handing herself over have not concluded and our investigations have not finalized," police national spokesman Vishnu Naidoo told AFP.

"The minister learned later that it just didn't materialize as it was supposed to. We have identified a suspect but she hasn't handed herself over yet. We do not know her whereabouts at this stage."

Mugabe had been expected to appear in a South African court Tuesday after she allegedly used an extension cord to assault a model who was at a Johannesburg hotel with her two sons.

The alleged attack threatened to spark a major diplomatic incident between the two neighboring countries which have strong political and economic ties.

Grace Mugabe, 52, is accused of beating Gabriella Engels, 20, on Sunday evening with an electrical extension cord, leaving her with injuries on her forehead and the back of her head.

"She's not under arrest because she cooperated and handed herself over to the police," South African Police Minister Fikile Mbalula told reporters.

"In terms of foreign citizens, they must understand they have responsibilities, especially those who hold diplomatic passports."

Pictures on social media appeared to show Engels with a bleeding head injury after the alleged incident at the Capital 20 West Hotel in the upmarket Johannesburg district of Sandton.

"I cannot just go to Zimbabwe and beat up people there and then the matter will disappear," Mbalula said.

"From the police side, we have had to act in the interests of the victim, we have opened a case."

According to local media, Mugabe was to appear at Randburg Magistrate's Court at 2:00 pm (1200 GMT).

She allegedly arrived at the hotel with bodyguards and accused Engels of partying with her sons Robert and Chatunga, both in their 20s, who live in the South African city.

"We were chilling in a hotel room, and (the sons) were in the room next door. She came in and started hitting us," Engels was quoted as saying by the Times Live website on Monday.

"The front of my forehead is busted open. I'm a model and I make my money based on my looks."

Grace Mugabe, who is 41 years younger than her husband Robert, 93, has two sons and one daughter with the Zimbabwean president.

Sizakele Nkosi-Malobane, a provincial minister in South Africa's Gauteng province, told Jacaranda FM radio that the case should be pursued fully through the courts.

"We hope that it will send a strong message to all leaders who abuse their power and assault innocent people in our country," she said.

Grace Mugabe regularly speaks at rallies in Zimbabwe and is seen as one potential candidate to take over from her increasingly frail husband.

Last month she urged her husband to name his chosen successor, reviving speculation about the race to take over from the world's oldest national leader.

President Mugabe has ruled Zimbabwe since independence from British colonial rule in 1980.

The succession battle is widely expected to pit Vice President Emmerson Mnangagwa against a group called "Generation 40" or "G40" because its members are generally younger, and which reportedly has Grace's backing.

Grace has previously denied harbouring ambitions to take over from her husband, but at other times has said she would be prepared to serve in any political position.

She has taken on a larger public role in recent years, speaking regularly at meetings to drum up support for the president and also heading the women's league of the ruling ZANU-PF party.

In 2014, Grace led a bitter campaign to expel from the party former vice president Joice Mujuru, who had been seen as a favourite to succeed to Mugabe.

In speeches this year the president has often slurred his words, mumbled and paused for lengthy periods.

His reign has been marked by brutal repression of dissent, mass emigration, vote-rigging and a sharp economic decline since land reforms in 2000.

The Zimbabwe government made no immediate comment on Grace Mugabe's case.