At least 28 killed in suicide bomb attacks in Nigeria 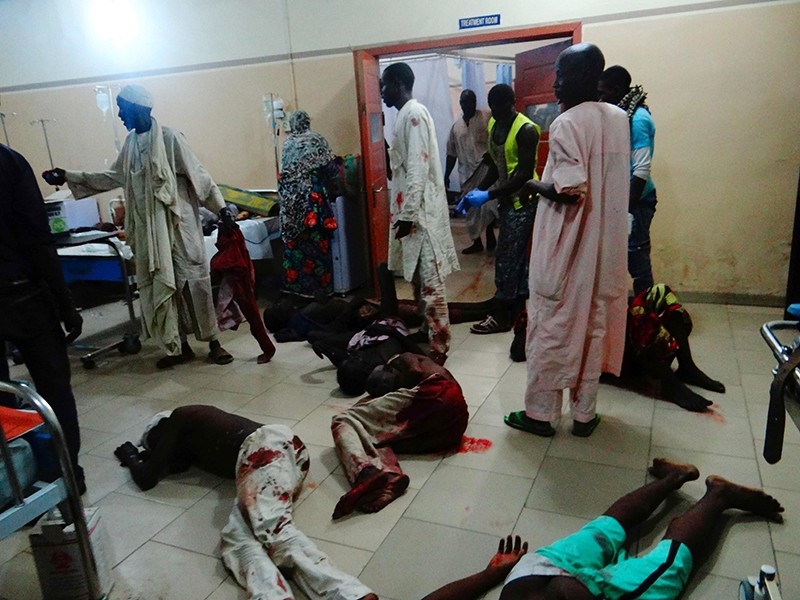 Injured victims of a female suicide bomber lie on the floor awaiting medical attention as beds were no longer available at a Maiduguri hospital in northeastern Nigeria on August 15, 2017. (AFP Photo)
by Compiled from Wire Services Aug 16, 2017 12:00 am

Three women suicide bombers blew themselves up at the entrance to a camp for displaced people in northeast Nigeria on Tuesday, killing 28 people and wounding 82, local sources said.

The regional Emergency Agency said 45 people were "critically injured." The death toll could be as high as 30.

Rescue crews worked into the night to deal with the injured and recover bodies.

Two other suicide bombers reportedly struck later Tuesday on the outskirts of Konduga. Details were slow to emerge. Emergency crews said a refugee camp had been targeted.

"When we got there we discovered that the situation was worse than we anticipated," Satomi Shamed from the regional Emergency Agency told dpa early Wednesday.

He said an army convoy accompanying rescue crews came under fire en route to the scene.

No group has claimed responsibility for the blasts.

The area is controlled by the terrorist group Boko Haram.

Northeast Nigeria is a hotbed of activity by the Boko Haram terrorist group, involving shootings, bombings and kidnappings.

It launched an insurgency in 2009 that has killed about 20,000 people and displaced around 2.6 million others, creating one of the world's biggest humanitarian crises.

Nearly two million are suffering from acute malnutrition, according to UN figures.