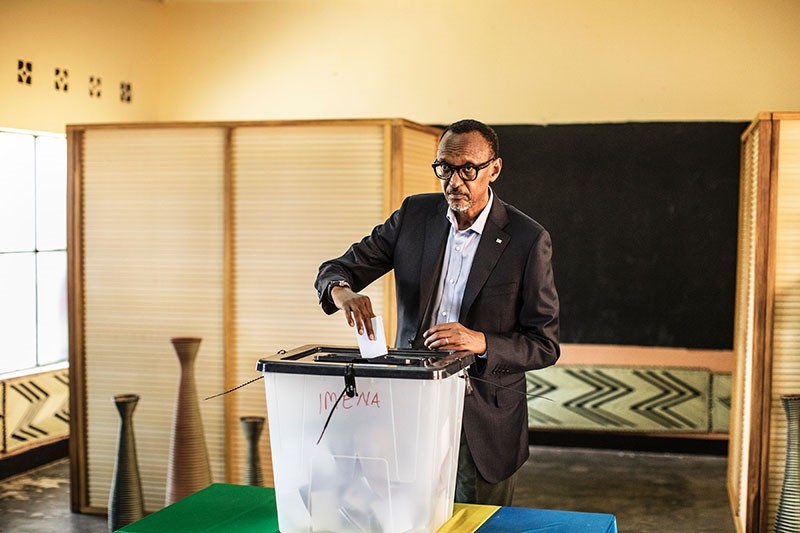 Rwandan President Paul Kagame was sworn in Friday for a third term in office after a crushing election win that rights groups criticized over irregularities and voter intimidation.

Nineteen African heads of state were present at the ceremony which took place in front of a packed crowd in the national stadium in Kigali, entertained by a military parade and drummers.

The 59-year-old Kagame, who was re-elected with nearly 99 percent of the vote, took a swipe at critics who regularly highlight repression and lack of freedoms in the tiny east African nation.

"Every African country has to contend with efforts to force us to live on someone else's terms," he said.

"They demand we replace systems that are working well for us with dogmas in which their own people are rapidly losing faith."

Among those attending the ceremony was Sudanese President Omar El Bashir, who is wanted by the International Criminal Court for genocide crimes committed against humanity.

Rwanda is however not a signatory to the ICC and is not obliged to enforce Bashir's arrest.

Notable absentees included Burundi's Pierre Nkurunziza and Joseph Kabila of the Democratic Republic of Congo (DRC), who have endured a frosty relationship with Kagame -- who appeared to reach out to his adversaries both at home and abroad.

"Today, Rwanda defines no one as an enemy, whether domestic or foreign. Every Rwandan has a country and with every other country, we seek partnership and cooperation," Kagame said at the inauguration.

Kagame won the August 4 election with 98.79 percent of votes against two little-known candidates. Kagame was able to seek a third term after a 2015 referendum saw 98 percent of the electorate in favor of changing the constitution to allow him to run in the August polls.

Human Rights Watch (HRW) said in a statement Friday the victory followed a campaign in which Rwandans were forced to donate money to the ruling party and blocked from attending opposition rallies.

"Kagame's landslide win came as no surprise in a context in which Rwandans who have dared raise their voices or challenge the status quo have been arrested, forcibly disappeared, or killed, independent media have been muzzled, and intimidation has silenced groups working on civil rights or free speech," said Ida Sawyer, HRW's Central Africa director.

One voter, from Rutsiro in western Rwanda, told HRW he had been forced to vote in front of an election official.

"It was easy to see who I was voting for on the ballot, so it was impossible for me to vote for anyone besides Kagame," he was quoted as saying.

After the election, the United States said it was "disturbed by irregularities" observed during voting.

Kagame has ruled Rwanda with an iron fist since 2000 and will now be president until 2024, at which time he could seek two extra five year terms after the 2015 constitutional amendment.

His Rwandan Patriotic Front (RPF) has governed the country since its armed wing defeated the country's ruling civilian and military authorities in 1994, ending the genocide of 800,000 Tutsis - Kagame's ethnic group - and moderate Hutus.

Kagame became president in 2000, but had already wielded wide-ranging powers after the genocide was halted.

The president's critics allege repression - including killings - of the opposition. But Kagame also enjoys widespread popularity, having transformed the country ravaged by genocide and civil war into one of Africa's most stable nations.

Kagame has overseen strong economic growth, at an average of eight percent between 2001 and 2015, while also turning Rwanda into a technological hub and uprooting corruption.