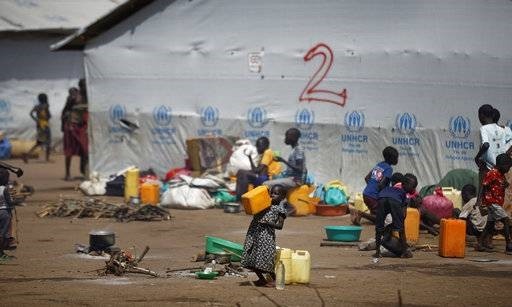 A young South Sudanese refugee girl drinks water from a plastic container at the Imvepi reception center, June 6.
by Compiled from Wire Services Aug 18, 2017 12:00 am

The number of South Sudanese refugees in Uganda hit 1 million, the United Nations has said, as hundreds of desperate families pour across the border every day seeking refuge from the civil war

The number of South Sudanese refugees sheltering in Uganda has reached 1 million, the United Nations said yesterday, a grim milestone for what has become the world's fastest-growing refugee crisis.

Ugandan officials said they are overwhelmed by the flow of people fleeing South Sudan's civil war and the U.N. refugee agency urges the international community to donate more for humanitarian assistance.

An average of 1,800 South Sudanese citizens have been arriving daily in Uganda over the past 12 months, the UNHCR said in a statement. Another 1 million or more South Sudanese are sheltering in Sudan, Ethiopia, Kenya, Congo and Central African Republic.

"Recent arrivals continue to speak of barbaric violence, with armed groups reportedly burning down houses with civilians inside, people being killed in front of family members, sexual assaults of women and girls and kidnapping of boys for forced conscription," the statement said.

"With refugees still arriving in their thousands, the amount of aid we are able to deliver is increasingly falling short."

The conflict in South Sudan has created Africa's biggest refugee crisis since the 1994 Rwandan genocide, and U.N. agencies are receiving a fraction of the cash they need to provide food and shelter. But the crowds keep flowing across rickety wooden bridges near the northwestern Ugandan border town of Busia, staggering under the weight of babies and a few pots or bundles of clothing balanced on their heads.

A World Vision official says more aid is needed to ensure refugee children on the move are protected when they arrive in Uganda. Enid Kabasinguzi Ocaya, World Vision's s disaster risk reduction and humanitarian emergency affairs manager in Uganda, said in a statement Thursday that "there is a fear that they may return to South Sudan and take part in the conflict."

Working in partnership with the United Nations, World Vision is the largest provider of food for refugees in Uganda. Over 85 percent of the South Sudanese refugees sheltering in Uganda are women and children.

"Two weeks ago my husband's uncle was killed," said Stella Taji, as she trudged barefoot over the bridge, a toddler clinging to her hand. "Since then we've been hiding in the bush. We have nothing."

Oil-rich South Sudan became the world's youngest nation in 2011, upon its independence from neighboring Sudan, but the elation soon evaporated amid corruption and ethnic divisions.Troops loyal to President Salva Kiir, a Dinka, and forces under former vice president Riek Machar, from the Nuer ethnic group, have battled each other since late 2013, killing tens of thousands and forcing nearly a third of the population of 12 million to flee their homes. The trickle of refugees into Uganda swelled into a river last year after a shaky Western-backed peace deal between Kiir and Machar collapsed within months. The conflict has further fragmented since, breeding a patchwork of militias and briefly plunging parts of the country into famine this year. An August report by South Africa-based South Sudan Human Rights Observatory said 987 civilians were killed in violence across South Sudan between May and July, mostly by government forces.