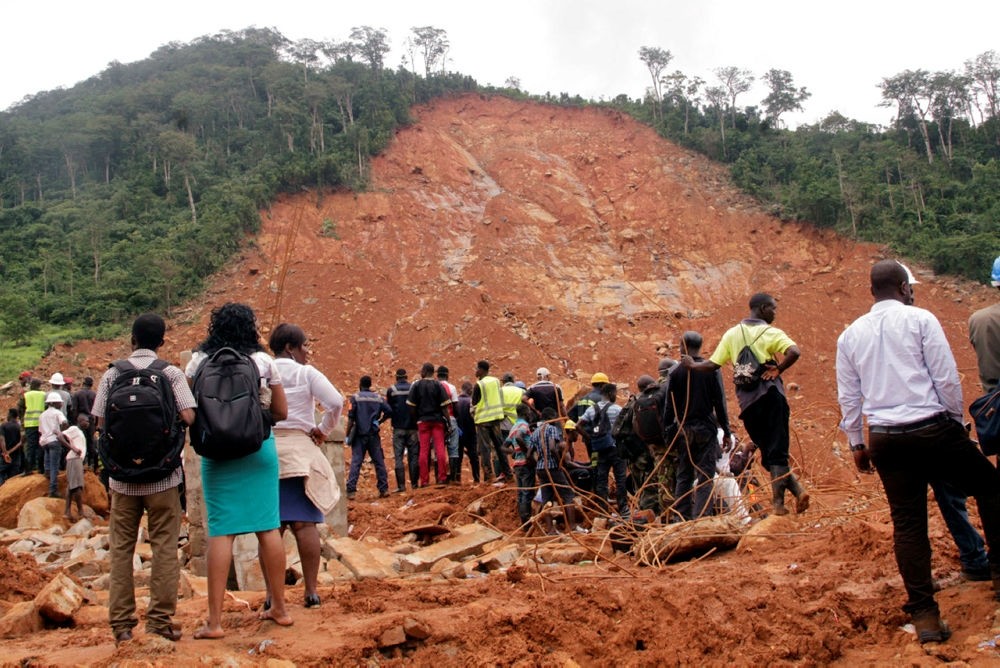 Volunteers stand at the scene of heavy flooding and mudslides in Regent, just outside of Sierra Leone's capital Freetown. (AP Photo)
by reuters
Aug 20, 2017 12:00 am

One of Africa's worst flooding-related disasters in years occurred when the side of Mount Sugar Loaf collapsed on Monday after heavy rain, burying parts of Regent town and overwhelming relief efforts in one of the world's poorest countries.

Authorities this week buried 461 bodies in quickly-dug graves in the nearby Waterloo cemetery, near the site of a mass burial for victims of the Ebola crisis that killed 4,000 people in the former British colony between 2014 and 2016.

Thirty-eight more bodies were found on Sunday, said chief coroner Seneh Dumbuya, bringing the official death toll to 499. They were being sent for immediate burial, he said.

The Red Cross said on Friday that over 600 are still missing.

An increasingly desperate search continued on Sunday on the steep hillside under the wet red mud, as the likelihood of finding survivors was all but extinguished.

Authorities said they were concentrating on digging up bodies to stop fluids from contaminated corpses getting into the water supply and spreading disease.

"We are doing all we can to ensure cholera does not break out," said Samuel Turay, an official at the health ministry.

The threat of deadly landslides is growing in west and central Africa as rainfall, deforestation and urban populations rise, experts say.

On Thursday, a landslide in remote eastern Congo crushed the mud houses of a lake-side fishing village, potentially killing over 200 people, a local official told Reuters.