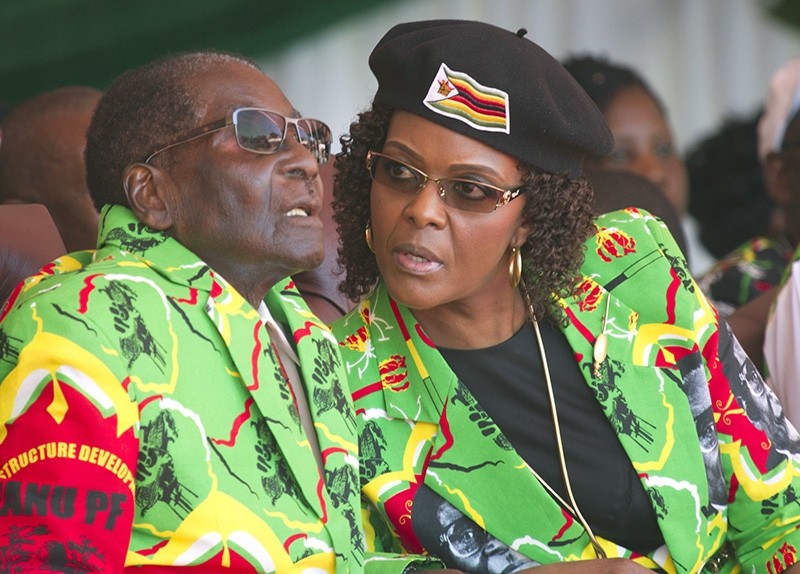 In this June, 2, 2017 file photo Zimbabwean President Robert Mugabe, left, and his wife Grace follow proceedings during a youth rally in Marondera Zimbabwe (AP Photo)
by Associated Press Aug 20, 2017 12:00 am

The wife of Zimbabwean President Robert Mugabe returned home from South Africa on Sunday despite calls that she be prosecuted for allegedly assaulting a young model at a luxury hotel in Johannesburg.

A report by Zimbabwean state broadcaster ZBC showed Grace Mugabe greeting government and military officials at the Harare airport after returning on an Air Zimbabwe flight with her husband, who had attended a summit of southern African leaders in Pretoria.

The South African government said Saturday that it was deciding whether to grant diplomatic immunity to Grace Mugabe at the request of the Zimbabwean government, though there was no immediate comment from South African authorities on Sunday. South African police had issued a "red alert" at borders to ensure she didn't leave undetected and said they were waiting for a government decision on the immunity appeal.

Gabriella Engels, a 20-year-old model, said Zimbabwe's first lady attacked her on Aug. 13, whipping her with an extension cord that cut her forehead. A group representing Engels said they will go to court to challenge the South African government if it is confirmed that immunity was granted to Mugabe.

"We will take a long term approach on this," said Willie Spies, legal representative at AfriForum, an organization that primarily represents South Africa's white Afrikaner minority.

"She may be back in Zimbabwe, but it may mean that she will find it very difficult to come back to South Africa in the future," Spies said.

The Zimbabwean president's outspoken wife has been criticized for a fiery temper and lavish shopping expeditions, but her rising political profile has some asking whether she is maneuvering to succeed her husband. She recently said that Zimbabwe's ruling party should restore a provision in its constitution stating that one of the party's vice presidents should be a woman, and has publicly challenged her 93-year-old husband to name a successor.

President Mugabe is expected to preside at a state funeral for a former minister in Harare on Sunday; it is unclear whether his wife will attend.

Amid the scandal over Grace Mugabe, Zimbabwe blocked flights by South Africa's government-owned airline on Saturday after an Air Zimbabwe flight was grounded at Johannesburg's main international airport on the previous evening. Both countries said they imposed restrictions because planes did not have a "foreign operator's permit."