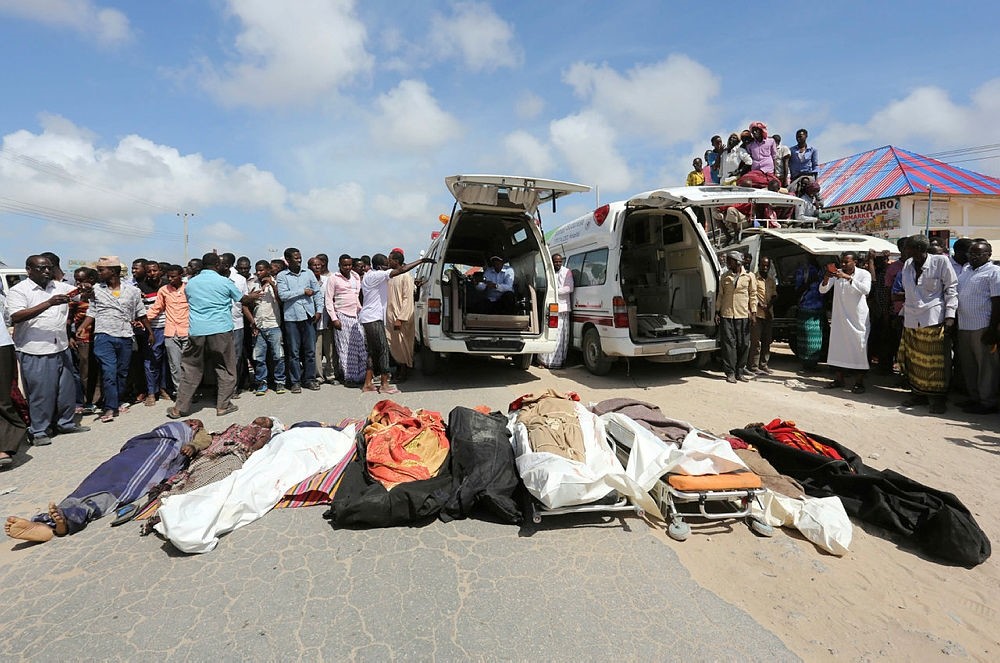 Ten civilians, including three children, were killed in a raid by foreign and Somali forces on a farm in southern Somalia, a deputy governor said Friday as officials displayed victims' bloodied bodies in the capital. The U.S. military confirmed it supported a Somali operation in the area and said it would look into the allegations.

The farmers were killed "one by one" after soldiers stormed the farm in Barire village early Friday, the deputy governor of Lower Shabelle region, Ali Nur Mohamed, told reporters in Mogadishu.

Three children aged 8 to 10 and a woman were among the dead, the deputy governor said. Their blanket-wrapped bodies were laid out in a grassy courtyard for display. Bodies of civilians, especially those killed in misdirected attacks, often are taken from remote areas to Mogadishu to draw media attention.

"These local farmers were attacked by foreign troops while looking after their crops," Mohamed told reporters. "The troops could have arrested them because they were unarmed but instead shot them one by one mercilessly."

A statement by Somalia's information ministry said the raid killed eight al-Shabab fighters and that the extremists began shooting at Somali forces after they entered the farm. "No civilians were harmed or killed in this operation," the statement said.

The U.S. Africa Command confirmed that U.S. forces were supporting the Somalia National Army while it conducted an operation in the area. It gave no details about the operation. The U.S. military has stepped up efforts this year against the Somalia-based extremist group al-Shabab, often in support of Somali forces.

"We are aware of the civilian casualty allegations near Barire, Somalia. We take any allegations of civilian casualties seriously, and per standard, we are conducting an assessment into the situation to determine the facts on the ground," the U.S. Africa Command said in a statement.

Al-Shabab, which has become the deadliest extremist group in Africa, continues to hold vast areas of rural Somalia after being chased out of major cities in recent years by a multinational African Union force and Somali forces. The group continues to threaten the fragile central government and carry out deadly attacks in neighboring countries, notably Kenya.

The U.S. and Somalia in recent weeks said strikes have killed al-Shabab leaders responsible for planning and executing deadly attacks in Mogadishu, where high-profile areas such as hotels and military checkpoints are often targeted with deadly bombings.