Challenges ahead of Kenya upon Supreme Court rule annulling elections 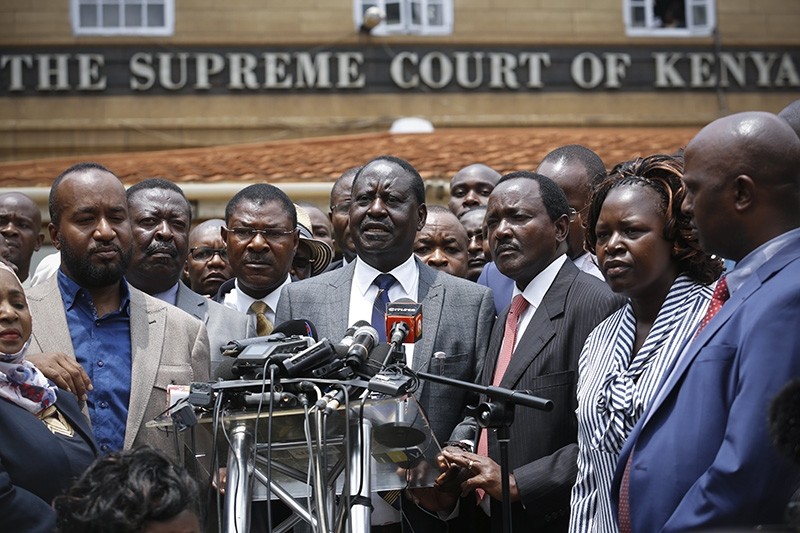 The leader of The National Super Alliance (NASA) opposition coalition and candidate Raila Odinga (C) speaks to the media in front of the Supreme Court after the court ruled in favor of him in central Nairobi, Kenya, Sept. 01, 2017. (EPA Photo)
by Sep 02, 2017 12:00 am

A decision by Kenya's Supreme Court to annul the results of last month's presidential election was hailed Friday by analysts as "historic" and "an example for the rest of the world".

However, they warned that the 60 days within which a new election must be held will bring tension and anxiety, and the restraint of leaders and credibility of the new election will be paramount.

On Friday, Kenya's Supreme Court rendered a shock ruling cancelling the results of the August 8 election over widespread irregularities.

Chief Justice David Maraga said a majority decision by the panel of seven judges, with two dissenting, found that President Uhuru Kenyatta "was not validly elected", rendering the result "invalid, null and void".

Veteran opposition leader Raila Odinga and his National Super Alliance (NASA) had taken the case to court, claiming the system transmitting votes had been hacked, and that forms from polling stations that were meant to back up the electronic results were not being uploaded.

"It is important for us as Kenyans to be respecters of the rule of law. I personally disagree with the ruling that has been made today, but I respect it as much as I disagree with it," Kenyatta said in a televised address, urging Kenyans to keep the peace, adding that his party is ready to again make the case to voters that it deserves another term.

"Six people have decided they will go against the will of the people," the president said, later telling his supporters that Maraga "and his crooks" had taken away his victory. The official results had given Kenyatta 54 percent of the vote to Odinga's 44 percent.

Opposition members danced in the streets, marveling at the setback for Kenyatta, the 55-year-old son of the country's first president, in the long rivalry between the country's top political families.

Separately, opposition's 72-year-old leader Odinga hailed the "very historic" ruling, saying, "For the first time in the history of democratization a ruling has been made by a court nullifying the irregular election of a president."

"It is a historic decision, the first of its kind in Africa," Murithi Mutiga, a Nairobi-based senior analyst at the International Crisis Group, told AFP. Similar court rulings have been seen in Austria, Haiti, Ukraine, Serbia and the Maldives.

Mutiga said the ruling "means Kenya, one of the most open societies in Africa, is gradually maturing as a democracy".

The "opposition can now go to court and expect to be served with justice", he added.

According to Nic Cheeseman, a professor in African politics at the University of Birmingham, many observers expected a "conservative" ruling -- similar to the decision in 2013 where Odinga took his grievances to court but eventually lost.

In a statement, Justus Nyang'aya, country director for Amnesty International Kenya, said the decision "demonstrates the independence of Kenya's judiciary and sets an example for the rest of the world".

But while the ruling "upholds the constitution" adopted in 2010, "it will put a lot of question marks on the international observers, who have massively said the election day went well," an African diplomat told AFP on condition of anonymity.

In the majority decision, Maraga said the election commission (IEBC) had been responsible for "irregularities and illegalities" which "affected the integrity of the election".

But until the court's full ruling is released, it is unclear what the judgement is based on.

"They've made one of the most important decisions in Kenyan history," Cheeseman said, "and it's going to be 21 days before we find out why".

Analysts bemoaned the wait, adding that the court's final statement will likely influence the next vote and the people who will be in charge of carrying it out.

"The reason why this election was not well run was because the IEBC had so little time to run it," Cheeseman said, noting that new election commissioners were named a mere seven months before the August poll.

"And so now you have less time".

For his part, the anonymous African diplomat said Kenya could see a rush of other dissatisfied candidates who lost out in governor, senator or MP races turn to the court with election grievances following the ruling.

"A lot of people will be nervous," Cheeseman said. "Kenya just had a difficult and controversial election, and this decision pushes it right back into another electoral campaign, which will start almost immediately".

"The outcome of the next election may be controversial again".

This is why "the reaction of the political leaders will be extremely critical in the next two months," Mutiga said.

"There will be anxiety, there will be uncertainty, but political leaders need to show some maturity and make sure that they don't ruin what in my view is a remarkably important step for Kenya's democracy".

Mutiga added however that "restraint will be difficult in this very polarized environment" -- which was also stark before, during and after the August vote due to deep ethnic, economic and political divisions in Kenya.

On Friday, Amnesty International urged "all parties to comply with the judgement," calling "on the police to observe restraint in their handling of any celebrations or protests" that may follow.

The August 11 declaration of Kenyatta's victory with 54.27 percent of the vote -- with not all the tallying forms in -- sparked two days of protests in the slums of Nairobi and Kisumu, traditional opposition strongholds.

At least 21 people, including a baby and a nine-year-old girl, were killed, mostly by police, according to an AFP tally.

Kenya's press on Saturday praised the decision, describing it as a sign of a maturing democracy.

The Saturday Standard headlined its front page "Maraga Thunder", while the Star went with "Not yet, Uhuru" and the Saturday Nation had "Raila's big victory".

All agreed that what the Nation termed a "Supreme Bombshell" was a welcome sign of the judiciary's independence.

"Kenyans have struggled for decades to institutionalize the rule of law. We have fought, shed blood, lost lives and property in search of constitutional order," the paper said in an editorial.

"Intrinsic in this is the desire to establish independent institutions that provide checks and balances against each other."

It said the ruling "signaled the end of the era of impunity that has painfully assailed this country for too long."

Writing in the Star, the president of the Law Society of Kenya wrote that every election except that in 2002 had been plagued by "complaints, irregularities, suspicion of impropriety" that no court had been willing to properly tackle.

The paper's editorial said the decision "will reverberate for years to come in Kenya and around the continent".

The press also raised prickly questions about the weeks to come. The new election must be held by October 31, and the opposition has declared it has lost all confidence in the electoral commission (IEBC).

"How it will conduct the next elections in the next 60 days in unimaginable," said the Nation.

"Already the NASA leadership has declared war on the commission and with or without that, its credibility has been severely dented and the public has lost confidence in it."

The Standard said the IEBC must "clean up house".

"What Kenya needs most now is an election conducted in a legal, fair and transparent manner."

As the country awaits the full ruling of the court, other questions remain such as what the decision means for the electronic vote transmission system, and whether the IEBC budgeted for another election.

"This is not the end. The toughest journey, campaigns and elections, is yet to begin," wrote the Nation.

With a touch of humor, the Standard published a cartoon showing Maraga standing on top of a globe, while a voice from the other side of the planet says: "Kenia? I thought they were only known for athletics?!" in a likely jab at the colonial pronunciation of the country's name.