Over 1,000 migrants intercepted by Libyan coastguards 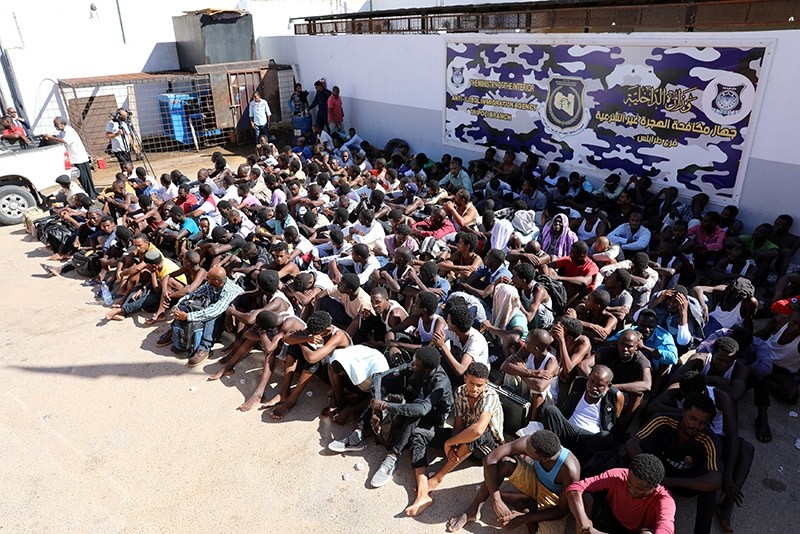 Sudanese migrants sit at a detention center before their voluntary return to their country, in Tripoli, Libya September 14, 2017. (Reuters Photo)
by Sep 16, 2017 12:00 am

Libyan coastguard vessels intercepted 1,074 migrants during an intensive day of operations west of the capital Tripoli on Saturday, a spokesman said.

There has been a sharp drop in migrant crossings between Libya and Italy since July, largely attributed to armed groups around the smuggling hubs of Sabratha and Zawiya blocking departures.

However, some boats have still been leaving from the area, where a number of different smuggling groups operate. Smugglers generally pack migrants into flimsy inflatable boats that are later picked up by international vessels and taken to Italy.

Those trying to cross early on Saturday were intercepted by coastguards from Zawiya, about 45 km (28 miles) west of Tripoli, said Ayoub Qassem, a coastguard spokesman.

"The coastal guards of Zawiya refinery rescued 1,074 illegal migrants on board more than eight boats," Qassem said. He said the migrants were from sub-Saharan African and Arab countries and had left from Sabratha and the nearby Talil and Wadi areas.

Crossings from Libya spiked in 2014, and since last year the North African country has been the main gateway for migrants trying to reach Europe. Some 600,000 have crossed the central Mediterranean since 2014.

The EU and Italy have been providing support for Libya's coastguards to enable them to intercept more migrants, a strategy that has been criticized by human rights groups.

Activists say migrants should not be sent back to Libya, where they are subject to a wide range of abuses.