At least 231 killed, 275 injured in suicide attack in Somalia's capital 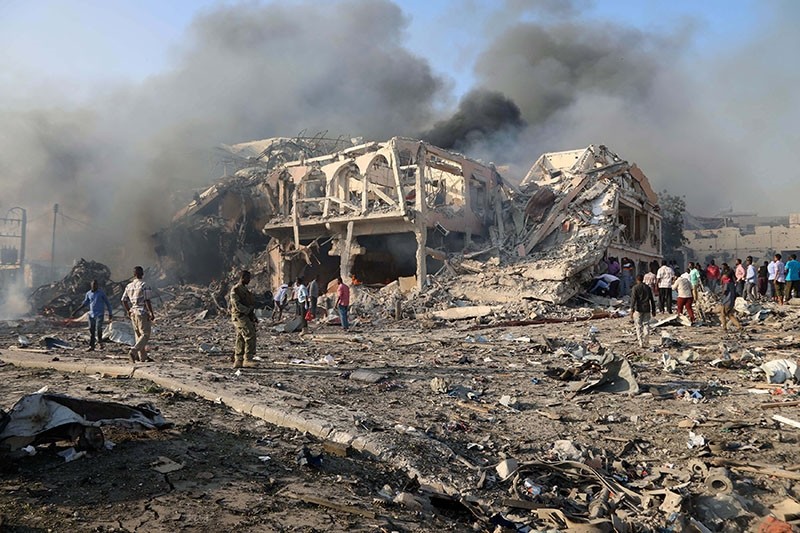 A general view shows the scene of an explosion in KM4 street in the Hodan district of Mogadishu, Somalia October 14, 2017 (Reuters Photo)
by Compiled from Wire Services Oct 14, 2017 12:00 am

The death toll from the most powerful bomb blast witnessed in Somalia's capital rose to 231 with more than 275 injured, making it the deadliest single attack ever in this Horn of Africa nation, said a senator.

Abshir Abdi Ahmed said the toll comes from doctors at hospitals he has visited in Mogadishu. Many of the bodies in hospital mortuaries have not yet been identified, he said.

Saturday's blast is the single deadliest attack ever in this Horn of Africa nation.

Somalia's government has yet to release the exact death toll from an explosion many called the most powerful they had ever witnessed in Mogadishu. Officials feared the toll would continue to climb.

Ambulance sirens echoed across the city a day after the blast as bewildered families wandered in the rubble of buildings, looking for missing relatives.

President Mohamed Abdullahi Mohamed declared three days of mourning and joined thousands of people who responded to a desperate plea by hospitals to donate blood for the wounded victims. "I am appealing all Somali people to come forward and donate," he said.

Many victims died at hospitals from their wounds, said Police Capt. Mohamed Hussein.

"There was a huge blast caused by a truck loaded with explosives. It went off at the entrance of a hotel alongside the K5 intersection," he said.

Police said people were trapped in the rubble of the Safari Hotel, which was largely destroyed in the explosion. The hotel is close to Somalia's foreign ministry. Rescue workers were at the scene.

There was no immediate claim of responsibility, but the al-Qaida aligned al-Shabab carries out frequent suicide bombings in the capital and elsewhere as it fights to overthrow the internationally-backed government.

Gunshots could be heard at the site, and ambulance sirens wailed across the capital, which has been under tight security with military-manned checkpoints.

The explosion left a trail of destruction across a busy intersection, with several bodies and bloodied slippers and shoes. Windows of nearby buildings were shattered. Overturned cars lay in the street, burning. A large plume of smoke rose nearby.

"There was a traffic jam and the road was packed with bystanders and cars," said Abdinur Abdulle, a waiter at a nearby restaurant. "It's a disaster," he said sadly.

The U.S. military has stepped up drone strikes and other efforts this year against the al-Qaida-linked al-Shabab, which is also fighting the Somali military and over 20,000 African Union forces in the country.