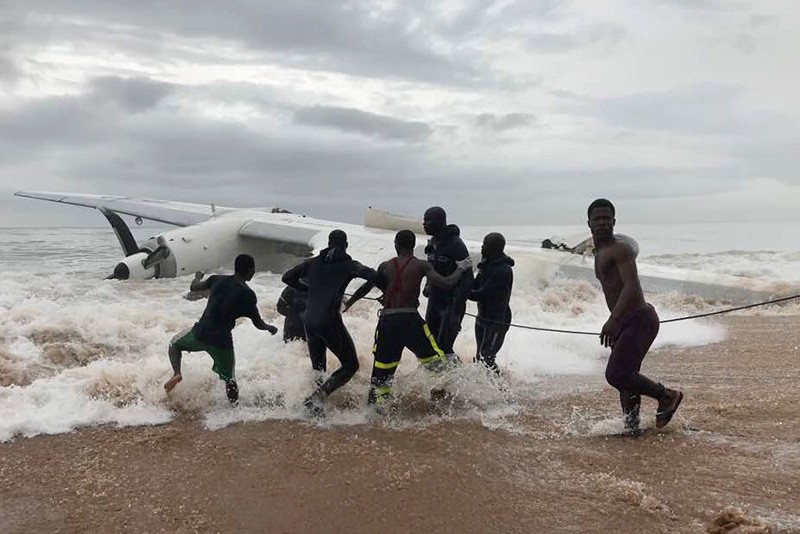 People pull the wreckage of a propeller-engine cargo plane after it crashed in the sea near the international airport in Ivory Coast's main city, Abidjan, October 14, 2017.
by Oct 14, 2017 12:00 am

At least four people were killed on Saturday when a propeller-engine cargo plane crashed into the sea near the international airport in Ivory Coast's main city Abidjan, a Reuters witness said.

The deceased were four Moldovan nationals, the Ivorian Security Minister Sidiki Diakite told reporters at the scene of the accident.

The spokesman for French forces in Ivory Coast said at least six French people nationals were injured in the crash, saying that the Antonov plane was carrying French military cargo. He says the injured have been transported to Abidjan's Port-Bouet camp for treatment.

Firefighters and rescue divers removed two bodies from the plane, which had broken into several pieces and come to rest near the beach. Two other bodies were visible in the wreckage.

The crash occurred during a storm with heavy rain and lightning and rescuers were hampered by rough seas. Though Abidjan's airport is located in a heavily populated area, it did not appear there were any victims on the ground.

The name of the company operating the aircraft was not immediately known.

The airport in Abidjan, a city of around 5 million people, is a busy regional transportation hub. It is also used by the French military which operates a logistics base there in support of a terrorist operation in West Africa's Sahel region.