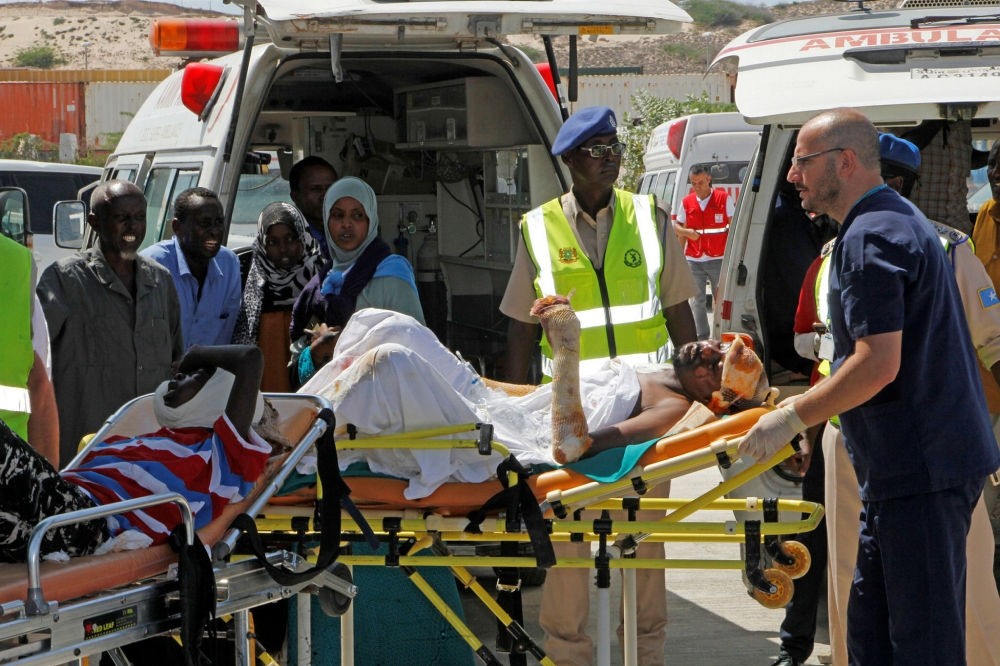 Turkish doctors transport a critically wounded man on a stretcher to a waiting Turkish air ambulance, Mogadishu, Somalia, Oct. 16.
by Compiled from Wire Services Oct 17, 2017 12:00 am

Following one of the deadliest attacks in sub-Saharan Africa, Turkey has stepped up its humanitarian aid efforts to help Somalis in violence-plagued Mogadishu, as the death toll rises to 300

Turkey's Health Minister Ahmet Demircan arrived in the Somali capital yesterday to oversee Turkish humanitarian efforts, accompanied by 33 staff, including a medical team specializing in emergency services, the Turkish Embassy in Somalia said in a statement. The death toll from Saturday's truck bombing in the Somali capital of Mogadishu is now more than 300, making it the deadliest attack ever experienced in the country, which is left reeling from the aftermath. The minister said Turkey shared the grievances of Somalis and outlined a plan to provide medical treatment to some of the victims in Turkey.

"Based on instructions given by Turkish President Recep Tayyip Erdoğan, we are working to offer assistance by providing medical assistance and transporting the injured to Turkey, where they will receive the necessary care," he told reporters.

A Turkish aircraft loaded with medical aid and emergency services workers, including 13 workers from the Turkish Red Crescent and the Disaster and Emergency Management Authority, landed in Mogadishu.

The Turkish humanitarian and medical aid was welcomed by the Somali government and the people.

More than 70 critically injured victims were being airlifted to Turkey for treatment yesterday as international aid began to arrive, officials said. Nervous relatives stood on the tarmac at the airport, praying for the recovery of their loved ones.

"The plane has now taken 40 injured victims and will return to take more of the injured," Deputy Prime Minister Mahdi Ahmed said during a press conference. Ahmed thanked the Turkish government for "its noble humanitarian position in helping Somalia in these critical circumstances."

A suicide attacker detonated a truck filled with explosives at a busy intersection in the capital Mogadishu on Saturday. It was the deadliest single attack in the volatile East African nation's history.

Saturday's blast occurred two days after the head of the U.S.-Africa Command was in Mogadishu to meet with Somalia's president, and two days after the country's defense minister and army chief resigned for undisclosed reasons. The U.S. military has stepped up drone strikes and other efforts this year against al-Shabaab, which is also fighting the Somali military and over 20,000 African Union forces in the country.

The explosion occurred at a major intersection that is normally packed with cars, buses and taxis, where hotels, stores, restaurants and government buildings cater to locals. The nearby Safari hotel is thought to have been a possible target in the attack, a hotel which offers accommodation to Somalis returning from abroad, government workers and journalists.

Before detonating the truck he was driving, the suicide bomber had raced along a Mogadishu street at high speed on Saturday, driving over motorcycles and cars and slamming into some vehicles stuck in traffic. Security forces opened fire on the truck but were unsuccessful in their attempts to shoot the driver.

The attack was one of the worst in the world in recent years. It is one of the deadliest attacks in sub-Saharan Africa, larger than the Garissa University attack in Kenya in 2015, in which 148 died, and the U.S. Embassy bombings in Kenya and Tanzania in 1998, in which about 219 were killed.

In addition to Turkey, Kenya and Ethiopia have offered to send medical aid in response to what the Somali government has called a "national disaster," according to Information Minister Abdirahman Osman.Al-Shabaab, Africa's deadliest Islamic extremist group, often targets high-profile areas of Mogadishu. Earlier this year, it vowed to step up attacks after both the Trump administration and Somalia's recently elected president announced new military efforts to be taken against the group.

The country's Somali-American leader, President Mohamed Abdullahi Mohamed, has declared three days of mourning and joined thousands of people who responded to a desperate plea from hospitals to donate blood.

Mogadishu, a city long accustomed to deadly bombings by al-Shabaab, was stunned by the force of Saturday's blast. The explosion shattered hopes of recovery in an impoverished country left fragile by decades of conflict, and it again raised doubts over the government's ability to secure the seaside city of more than 2 million people.