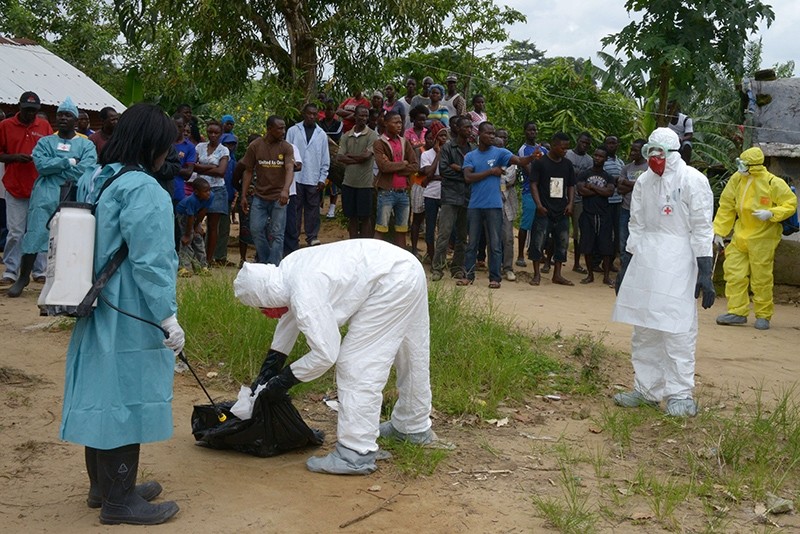 Liberian Red Cross health workers wearing protective suits intervene in a neighbourhood hit by the Ebola virus in Banjor on the outskirts of Monrovia on September 4, 2014 (AFP File Photo)
by French Press Agency - AFP
Nov 04, 2017 12:00 am

The Red Cross has uncovered several cases of fraud by officials during efforts to combat the Ebola outbreak that struck West Africa in 2014-2016, estimating losses of $6-million.

In a statement, the Geneva-based International Federation of Red Cross and Red Crescent Societies (IFRC) said it was "outraged," and said it would "ensure any staff involved are held to account."

The Ebola virus killed more than 11,300 people and infected an estimated 29,000, mainly in Guinea, Sierra Leone and Liberia.

The IFRC said the operations set up to contain the outbreak "were among the most complex in recent humanitarian history," with several groups moving quickly to deploy staff and mobilize volunteers, and spending tens of millions of dollars on medical equipment and other supplies.

In Sierra Leone, it said it had found evidence of "likely collusion" between former IFRC employees and a bank, leading to a potential loss of $2.1-million.

Overbilling and fake invoices by a provider of customs clearance services in Guinea cost the organization $1.2 million, and two other investigations in the country are underway.

The IFRC also said it had previously found that in Liberia, inflated prices for relief items and payroll costs had cost it $2.7 million.

The organization said it was "committed to holding all those involved in any form of fraud to account, and to reclaiming all misappropriated, diverted or otherwise illegally taken funds."

It also said that since 2014 it has bolstered efforts to root out corruption in its operations, including cash spending limits in "high-risk settings" and deploying trained auditors when sending out teams.