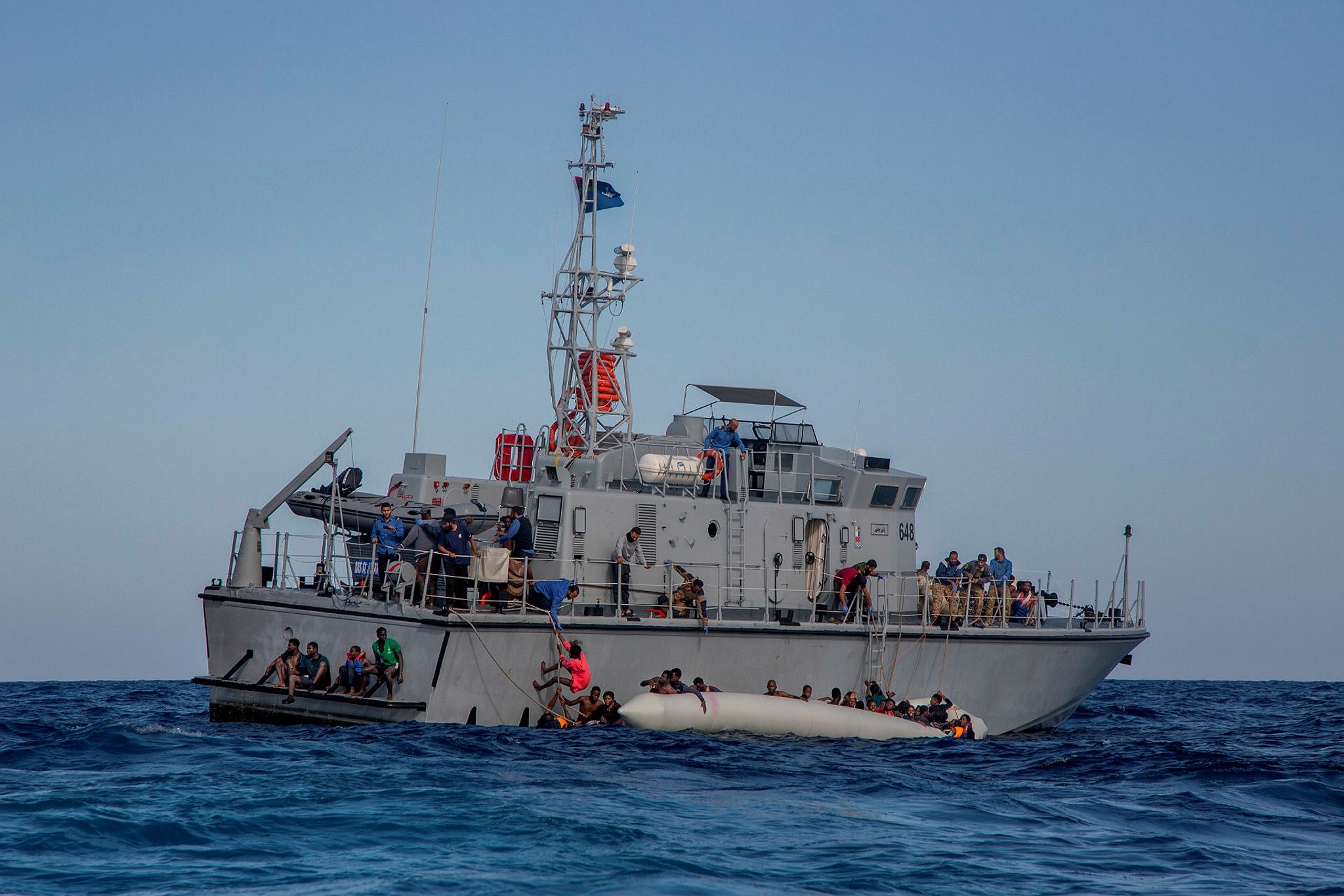 The Libyan coast guard tries to recover migrants from a rubber raft on the Mediterranean Sea, Nov. 6.
by Compiled from Wire Services
Nov 08, 2017 12:00 am

A German nongovernmental organization and the Libyan coast guard blamed each other for the deaths of at least five people, including a child, during a rescue operation on the Mediterranean Sea

At least five African migrants died and more were missing off Libya's western coast on Monday after a boat carrying about 140 people capsized. The tragedy happened as some migrants refused rescue by the Libyan Coast Guard and tried instead to swim to a German rescue vessel.

The migrants' rubber boat overturned some 30 miles off the Libyan coast, said Libyan officials and rescue workers in Tripoli where the coast guard brought some 45 survivors.

A video obtained by Reuters showed how, during the rescue operation, some migrants tried jumping off the Libyan patrol boat which had rescued them to reach a ship of Sea Watch, one of several non-governmental organizations which operate search-and-rescue boats in the Mediterranean, a few meters away.

Some screamed to be allowed to leave the Libyan boat as the German vessel came closer. Sea Watch said the lives had been lost needlessly because of heavy handed tactics of a coast guard being trained and financed by the European Union. The Libyans tried to discourage the migrants from trying to reach the German boat, it said.

The incident sparked mutual recrimination by Sea Watch and the Libyan Coast Guard.

At least five migrants had died, including a toddler, due to the "violent and reckless behavior of [the] Libyan coast guards," Sea Watch said on its Twitter feed, adding that 58 had been rescued.

"The so-called Libyan Coast Guard forced as many as they could into their vessel to take them back to Tripoli," the German group added.

In response, the Libyan Coast Guard accused Sea Watch of causing "panic and confusion" among the migrants.

"They all wanted to reach the ship of the German NGO," spokesman Gen. Ayoub Qassem said, as reported by AFP news agency. "Even those who had been rescued and were on the coast guard's boat jumped in the water to try and reach the Sea Watch boat, which refused orders to leave the area."

The Libyan vessel took an unknown number of migrants back to the North African state while 58 survivors were on board the Sea Watch 3.

The sea crossing from Libya to Italy, operated by people-smugglers based in the North African country, is now the main route for migrants bound for Europe.In Libya, the turmoil engulfing this North African country has become a death trap for thousands of migrants, most of them from sub-Saharan African countries, seeking to escape poverty and find a better life in Europe. But numbers crossing to Italy have fallen sharply since July due to a drop in people smuggling and increased activity by Libya's European-backed coast guard.

European efforts to beef up the Libyan coastguard have been cited as one reason for a sharp fall in the number of migrants leaving Libya for Italy on traffickers' boats since mid-July.

However, there have been signs of a pick-up in activity off Libya since the start of November.

Some 2,500 migrants have been rescued and brought to Italy so far this month, along with the bodies of 26, mainly Nigerian, women recovered over the weekend.

According to the U.N.'s International Organization for Migration, at least 2,600 have died in the central Mediterranean migration route from Libya to Italy through Nov. 1.