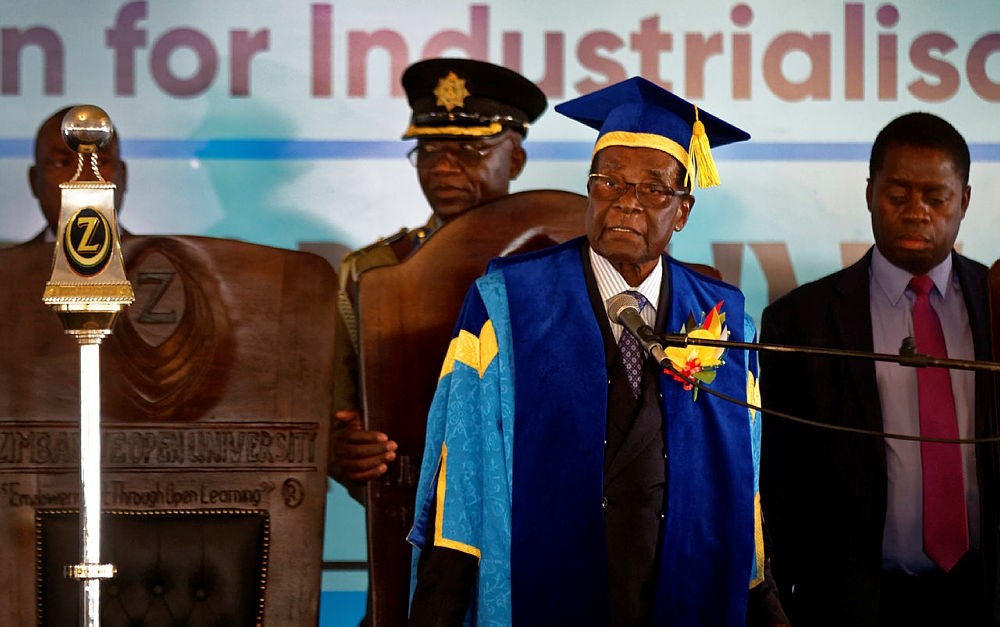 Zimbabwe President Robert Mugabe made his first public appearance since the military put him under house arrest this week, attending a graduation ceremony in the capital, Harare, to applause.

The appearance came during an extraordinary series of negotiations with regional leaders over Mugabe's departure after 37 years in power. Zimbabwe's military said it was making "significant progress" in the talks while it pursues and arrests some allies of the leader and his wife.

The military is taking pains to show respect for the 93-year-old leader, the world's oldest head of state, by referring to him as the president and the commander-in-chief.

Friday's graduation event appears to allow Mugabe to project the image of leadership, even as calls for his departure grow stronger. Some Zimbabweans worried that Mugabe, the only leader many have ever known, would somehow find a way to stay on.

The military statement reported by the state-run Herald newspaper and Zimbabwe Broadcasting Corporation said military leaders are "engaging with the Commander-in-Chief President Robert Mugabe on the way forward and will advise the nation of the outcome as soon as possible."

"Significant progress has been made in their operation to weed out criminals around President Mugabe," the statement said, adding that the military had arrested some while others remained at large. Those sought had been "committing crimes that were causing social and economic suffering in Zimbabwe."

The military is seeking Cabinet ministers and other top officials who had been associates of first lady Grace Mugabe, part of a clique dubbed the G40 because many were in their 40s and 50s. They are of a different generation from the one that fought for independence from white minority rule.

Army troops and armored vehicles continued to patrol the capital, Harare, as Zimbabweans went about their daily business. Residents said they had feared at first when the military moved in but praised the current calm.

Headlines in some local newspapers declared the Mugabe era over. "Dawn of a new era," one said. "Mugabe remembered for brutal 37-year rule," said another.

The ongoing negotiations appear to be trying to get Mugabe to agree to hand over to a new government. But difficulties could include the timing. The ruling party is set to meet next month, and Mugabe's term ends next year. An election date has not been set.

In another striking image of the fluidity of the political situation, the Zimbabwe Herald on Thursday published photos of Mugabe jovially shaking hands with army commander Constantino Chiwenga, the general who ordered the president's arrest.

Others pictured in the first round of talks at State House, the president's official residence, include Defense Minister Sydney Sekeramayi, Intelligence Minister Kembo Mohadi, South African Cabinet ministers who are acting as mediators and a local Catholic priest, Fidelis Mukonori, whom Mugabe has used as a mediator before.

Grace Mugabe was not pictured. Her rapid political rise had alarmed many who feared she could succeed her husband after he fired his longtime deputy, Emmerson Mnangagwa, last week. That firing set off the military's moves, and Mnangagwa is expected to lead any new government.

The military wants the process of establishing the new government to appear to be constitutional in order to maintain a veneer of legality and the approval of the 16-nation regional bloc, the Southern African Development Community, and the African Union.

As a landlocked country, regional sanctions by the bodies could be harmful to Zimbabwe's already ailing economy.

A committee of SADC on Thursday has recommended an emergency summit of heads of state to discuss the Zimbabwe situation. It was not clear when that would take place.