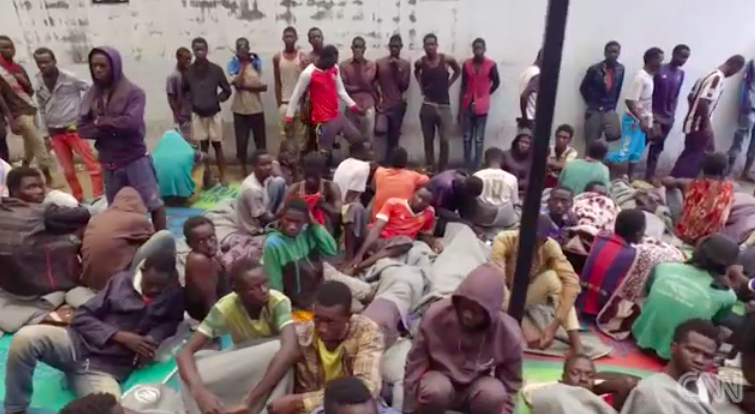 France on Wednesday called an emergency meeting of the U.N. Security Council over slave-trading in Libya as President Emmanuel Macron blasted the auctioning of Africans as a crime against humanity.

"We are doing it as a permanent member of the Security Council. We have this capability and we are using it."

Macron said the auctions, captured on film in footage aired by U.S. network CNN, were "scandalous" and "unacceptable."

"It is a crime against humanity," he said after meeting with African Union chief Alpha Conde.

"I hope we can go much further in the fight against traffickers who commit such crimes, and cooperate with all the countries in the network to dismantle these networks."

CNN aired footage last week of an apparent auction where black men were presented to North African buyers as potential farmhands and sold off for as little as $400.

But the European Union -- which is increasingly influenced by the French president -- has also been criticized for cooperating with the Libyan coastguard to prevent migrants crossing the Mediterranean.

AFP spoke to a number of black African men in Cameroon this week who also reported being slaves in Libya, which has descended into civil war since the Western-backed overthrow of dictator Moamer Kadhafi in 2011.

"It was total hell," said Maxime Ndong, one of 250 migrants who arrived in Cameroon on Tuesday night on a plane chartered by the International Organization for Migration (IOM) to take people home.

"There is a trade-in black people there. People who want slaves... come to buy them," he told AFP.

"If you resist, they shoot at you. There have been deaths," added Ndong, who spent eight months in Libya.

Another migrant, 22-year-old Sanogo, said he had been caught by people who said they were police before being sold to a slave trader. He was then forced to work on a tomato farm.

U.N. Secretary-General Antonio Guterres expressed horror at the footage on Monday, saying the auctions should be investigated as possible crimes against humanity.