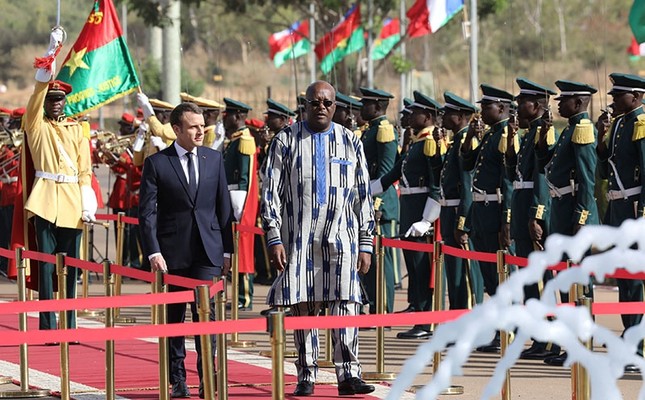 Macron played down reports Tuesday of a grenade thrown at French soldiers shortly before his arrival in Burkina Faso's capital, saying much worse attacks linked to "deadly ... terrorism" targeted the country.

The grenade, which wounded three civilians, was thrown late Monday, just hours before Macron was due to speak before a university audience at Ouagadougou, RFI radio station said.

Eyewitnesses said two people on a motorcycle threw the grenade. The attackers missed their intended target, a bus carrying members of the French military.

"Let's put things in perspectives and keep our cool," Macron said in a news conference at Burkina Faso's presidential palace.

"It's only a grenade, I don't forget the deaths your people had to suffer yesterday, and in the weeks and months before," he said, adding: "And they are victims of what? Not to a reaction to a visit by France's President. They are the victims of terrorism, of the deadly obscurantist terrorism against which we are all fighting with determination."

Later on Tuesday, stones were thrown at one of the vehicles that were part of the French delegation, Macron's spokesman Bruno Roger-Petit said, adding that the French president was not in that car but speaking with Burkino Faso's president, Roch Marc Kabore.

Macron and German Chancellor Angela Merkel are due to address a European Union-Africa summit in Ivory Coast's Abidjan this week, focusing on education, investment in youth and economic development to prevent refugees and economic migrants from attempting the treacherous journey across the Mediterranean.

In his on a three-day visit to West Africa, Macron is urging international support for a new military force that includes Burkina Faso and four other countries and is meant to counter a growing terrorist threat. Burkina Faso has seen two attacks on restaurants popular with foreigners, including one in August that killed 18 people.

In his speech in Ouagadougou, Macron sought to make a clean break from his predecessors saying that he came from a generation that would not tell Africans what to do and would focus his efforts on bridging ties between Africa and Europe.

"I will not stand by those who say the African continent is one of crises and misery. I will be alongside those who believe that Africa is neither a lost continent nor one that needs to be saved."

Macron added that he wants a "European-African initiative" to end the "terrorists and human traffickers' strategy."

He proposed a crackdown on human smugglers' networks between Africa and Europe, after a video footage, broadcast on CNN earlier this month, showed the auction and sale of migrant men as slaves in Libya.

Macron said he wants "Africa and Europe to help populations trapped in Libya by providing massive support to the evacuation of endangered people." He did not elaborate. He said he will formally detail his proposal at a summit in Ivory Coast Wednesday.

Share on Facebook Share on Twitter
Previous in Africa Kenyan President Uhuru Kenyatta was sworn into office for a second... Next in Africa The European Union, United Nations and African Union have agreed to...
DAILY SABAH RECOMMENDS