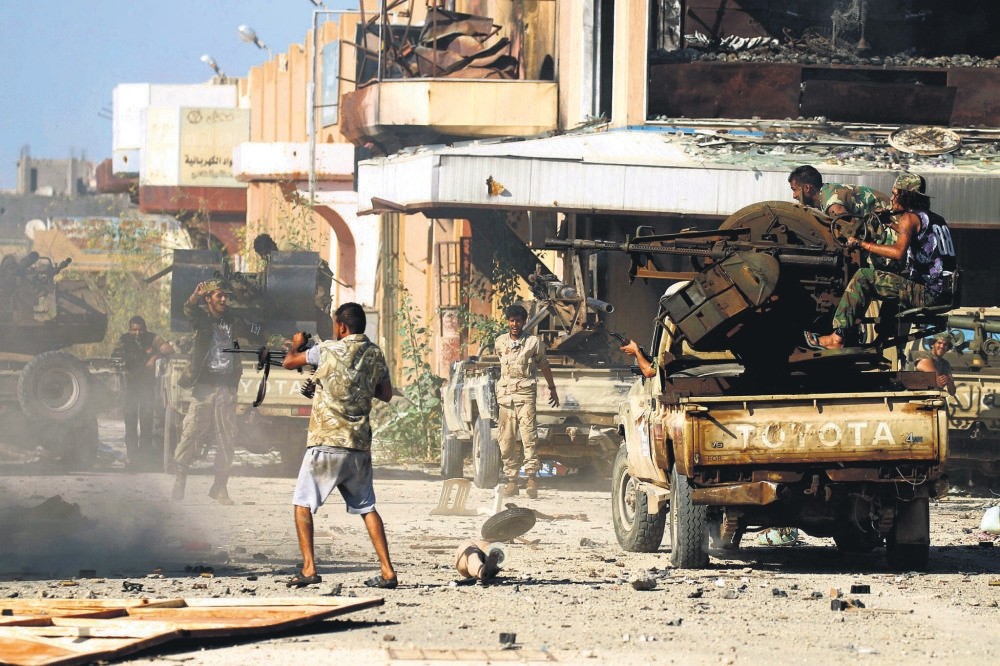 Factions fight after Libya descended into chaos following the ouster and subsequent killing of Muammar Gadhafi in 2011.
by Compiled from Wire Services Dec 19, 2017 12:00 am

Following the expiration of a two-year mandate of a U.N.-backed administration based in the Libyan capital of Tripoli, the prime minister of the country's unity government, Fayez al-Sarraj, dismissed claims, saying the deal for political settlement remains in place

"Those who set obstacles will not be able to prevent the National Accord government from doing its duties," al-Sarraj said in a statement released yesterday, according to Anadolu Agency (AA). He reiterated the commitment of Libya's Presidential Council to hold elections in 2018. "We will not allow any vacuum that will be filled with chaos and violations," he added.

In a televised address earlier Sunday, Hafter strongly hinted that he might step in to fill the void, although he stopped short of saying clearly that he would run in presidential elections if a vote is held next year, or that he might take the reins before that. His address appeared to deliberately leave all options open.

He said the expiry of the U.N. mandate for the Tripoli administration signaled the demise of all attempts to reach a political solution that would reunite the vast, oil-rich nation. He has already entertained many attempts to do that, but they all failed, he explained.

"The 17th of December has arrived and brought with it the end of the so-called Skhirat agreement," Haftar said, as reported by the Associated Press (AP). "Therefore all institutions created by this agreement are void," he added.

"These institutions have not obtained full legitimacy since the first day they started working, and as of today, Libyans feel that they have lost patience and that the promised period of peace and stability has become a faraway dream."

The U.N.-brokered agreement signed in Morocco on Dec. 17, 2015 established Libya's Government of National Accord (GNA) for a one-year period, renewable only once. Despite that deal, Libya has remained divided between the GNA government in Tripoli led by Prime Minister al-Sarraj and a rival administration backed by Haftar in the east.

The U.N. said the agreement, which aimed to unite the country's warring factions, is still in force until a new one is adopted. The U.N. said in a statement Sunday that it was "intensively trying to establish the proper political, legislative and security conditions for elections to be held before the end of 2018."

The U.N. in September launched a fresh push to agree a new accord aimed at bringing stability to war-torn Libya. In a statement on Sunday the U.N.'s special representative to Libya Ghassan Salame said Libyans were "fed up with violence" and hoped "for a political solution, for reconciliation and for harmony," according to Agence France-Presse (AFP).

"I urge all parties to heed their voices and refrain from any actions that could undermine the political process," the statement said. The U.N. Security Council last Thursday insisted the 2015 deal remains the "only viable framework" to prepare for elections next year.

The foreign ministers of Tunisia, Algeria and Egypt after meeting in Tunis on Sunday, welcomed the U.N. Security Council declaration. They also reaffirmed their rejection of "any outside interference in Libya" and "any attempt by any Libyan party to derail the political process" there.

Likely in response to Haftar's recent bluster, the head of the eastern-based, internationally recognized parliament, Agila Saleh, called for parliamentary and presidential elections to be held in 2018. That chamber acts as a de facto government in eastern Libya.

"I call upon the Libyan people to participate in the upcoming parliamentary and presidential elections," he said in a TV broadcast, "It is the only way to peacefully and democratically transfer power." Libya has remained in a state of turmoil since 2011, when a bloody uprising led to the ouster and death of longtime President Moammar Gadhafi.