12 killed, over 260 injured in collision in South Africa 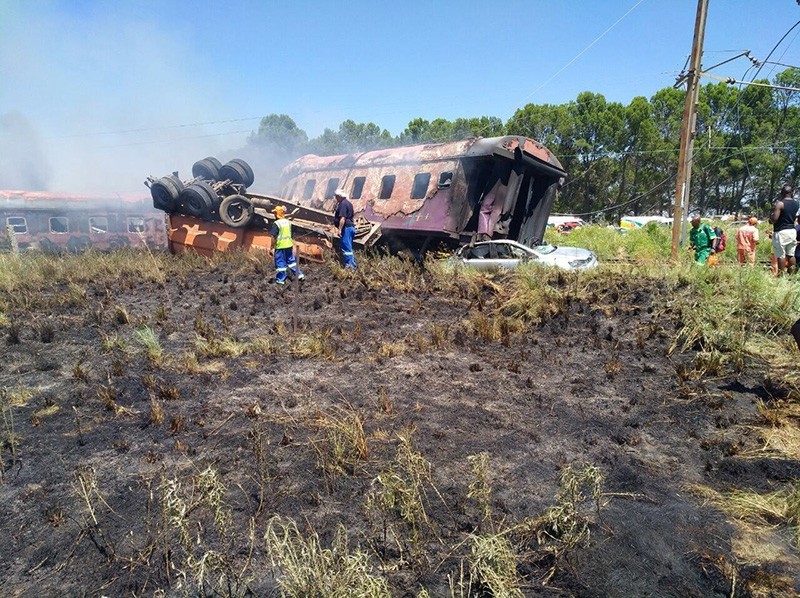 A handout photo made available by ER24EMS showing rescue workers inspect the remain of a intercity train that derailed after hitting a truck that was crossing the tracks, Kroonstad, South Africa, 04 January 2018 (EPA Photo)
by Associated Press Jan 04, 2018 12:00 am

A passenger train carrying people home after the holidays slammed into a truck in rural South Africa on Thursday, killing at least 12 people and injuring more than 260 others, the government said.

Authorities blamed the truck driver for allegedly trying to cross the tracks just ahead of the oncoming train, part of which burst into flames after the collision and forced passengers to hurriedly drag their luggage from the smoking wreck to a nearby road.

"The truck driver was taking chances. He thought that he was going to pass through," Transport Minister Joe Maswanganyi told journalists. "Little did he know that the train was going to hit him. That has cost a lot of lives."

At least 12 people died and 268 were injured, four of them critically, said Maswanganyi. He indicated that the death toll could rise.

Video shows part of the Shosholoza Meyl train in flames after the collision that occurred between the communities of Hennenman and Kroonstad in Free State province. The crash derailed half a dozen carriages, and power lines were damaged. A large vehicle was upside down beside a train carriage that appeared to have partly crushed another, smaller vehicle.

Swartz told local media outlet eNCA that the truck towing two trailers was halfway across the track when it was hit by the train and dragged for 400 meters (1,300 feet).