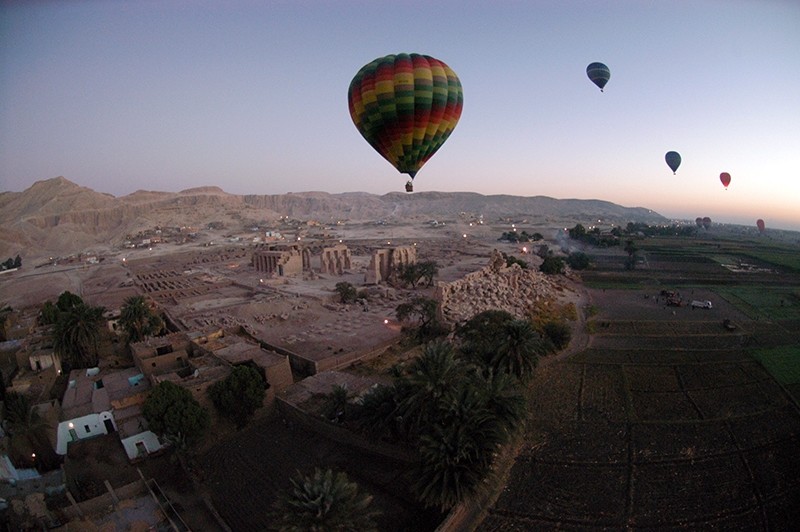 This file photo taken on November 15, 2007 shows tourist hot air balloons floating during dawn across Egypt's Valley of the Kings, near Luxor. (AFP Photo)
by Associated Press Jan 05, 2018 12:00 am

A hot air balloon with foreign tourists sightseeing over the southern city of Luxor crash landed on Friday, killing a tourist from South Africa and injuring twelve others, Egyptian officials said.

The officials said the incident was caused by strong winds that forced the balloon, which was carrying 20 tourists, off its course above the ancient city, home to some of Egypt's most remarkable pharaonic temples and tombs.

The balloon took off shortly before sunrise and flew about 45 minutes at an altitude of 450 meters (1,476 feet) before the pilot lost control due to strong wind that forced a crash landing in a mountainous area, the officials said.

The officials said the killed tourist was South African. No details were immediately available on the nationalities of the other victims. The remaining 12 tourists were unhurt.

Other balloons had taken off around the same time but landed safely, the officials added, speaking on condition of anonymity in line with regulations.

Earlier in the day, Egypt's meteorological service had warned of strong winds across the country mainly in the Nile River delta and northern Egypt.

Hot air balloon incidents have occurred in the past over ancient Luxor. The deadliest took place in 2013 when a balloon flying over the city caught fire and plunged about 305 meters (1,000 feet) to the ground, crashing into a sugar cane field and killing at least 19 foreign tourists.

Over the years, Egypt has tightened safety rules for balloon rides, which are now monitored by cameras and banned from flying above 2,000 meters (6,562 feet).

Hot air balloon flights above Luxor are famous among tourists for because of the spectacular views of the ancient Karnak and the temples of Luxor. Such flights usually start before sunrise and pass over green fields leading to the Valley of the Kings — the burial site of famous boy king Tutankhamun and other pharaohs.

In 2015, tourism was dealt a blow when the Islamic State group's affiliate in Egypt downed a Russian passenger plane over the Sinai Peninsula, killing all 224 people aboard. Egypt never officially said what caused the downing of the Russian plane but IS said it blew up the plane with a bomb smuggled on board.

After that bombing, Russia imposed a ban on all flights to Egypt and Egypt's national carrier is still barred from flying to Russia. Flights between Moscow and Cairo are planned to be resumed in February, after more than a two-year hiatus.

The Egyptian government has been trying to draw tourists back to the country by announcing ancient discoveries and tightening security measures around tourist sites.