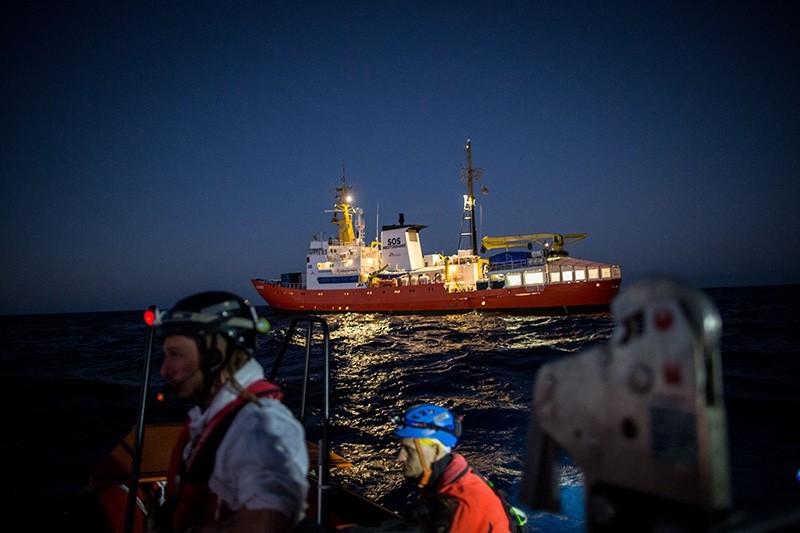 The Aquarius (C), a former North Atlantic fisheries protection ship now used by humanitarians SOS Mediterranee and Medecins Sans Frontieres, is seen on Dec. 26, 2017, during a rescuing operation in the Mediterranean Sea. (AFP Photo)
by Associated Press Jan 06, 2018 12:00 am

At least eight migrants died and 84 were rescued Saturday from a smugglers' foundering rubber dinghy in the waters off Libya, the Italian coast guard said. An aid group said dozens of migrants could still be missing.

The Italian coast guard, which coordinates rescues in international waters off Libya's coast, said an aircraft on patrol for a European anti-smuggling operation spotted the dinghy, which was in difficulty Saturday morning in the Mediterranean Sea. Italian navy and coast guard vessels were involved in the rescue.

Proactiva Open Arms, a Spanish humanitarian group that is one of the few NGOs which still operate their own rescue ships, said some migrants had spent hours in the water before being saved. Laura Lanuza, a spokeswoman, said there were at least 86 survivors. It wasn't immediately clear why their survivor tally was different than the coast guard.

The aid group tweeted that possibly dozens more migrants could be missing from the boat.

The Italian news agency ANSA said the dinghy was partially submerged when it was spotted.

Human smugglers often cram more than 100 people into dinghies designed to hold far fewer to maximize their profits on the dangerous Mediterranean crossings from lawless Libya to Europe.

Hundreds of thousands of migrants have reached Italy in the last few years after being rescued in the central Mediterranean from human traffickers' unseaworthy boats. Some 119,000 migrants arrived that way in Italy in 2017.

The International Organization of Migration also recorded more than 3,100 deaths among migrants making the Mediterranean crossing in 2017, but the actual number is likely higher since an unknown number of boats sink without rescue crews ever knowing.

Since last summer, the number of migrants coming across the Mediterranean has lessened considerably after the Libyan coast guard, trained and aided by the Italian military, started more aggressively intercepting smugglers' boats shortly after they were launched.

Human rights advocates, while opposed to trafficking, have criticized that approach, saying it means the mostly sub-Saharan Africa migrants are then trapped in slave-like conditions in detention camps in Libya.