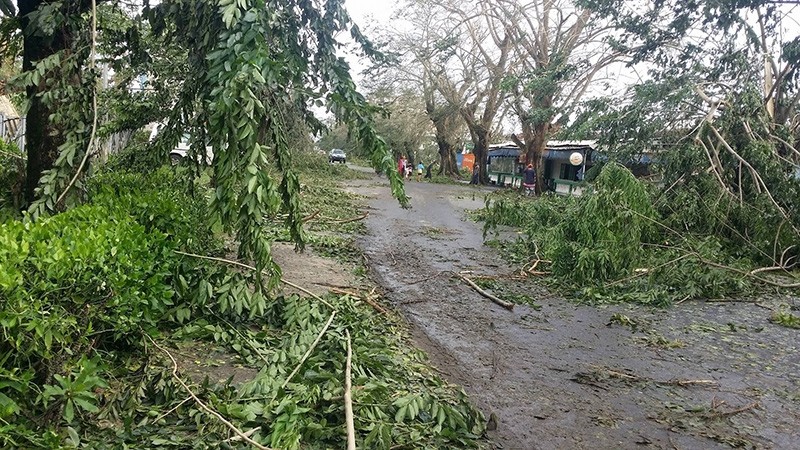 Fallen trees are seen on the street in the aftermath of tropical cyclone Ava in Toamasina, Madagascar, January 5, 2018 in this picture obtained from social media. (Via Reuters)
by Jan 09, 2018 12:00 am

At least 33 people were killed in Madagascar after Tropical Cyclone Ava slammed through, cutting off important transport links, the island's emergency services said on Tuesday.

Another 22 people are still missing after the storm that caused flooding and landslides across the country off the south-eastern coast of Africa. More than 25,000 people had to evacuate their homes.

Ava had first reached Madagascar on Friday with storm winds that caused heavy rainfall. The country's eastern side was especially affected, but devastating floods also hit the capital, Antananarivo.

Seventeen of the victims died on Monday after a mudslide in the south.

Even though water levels had begun sinking on Tuesday, residents were still urged to be cautious when returning home, said emergency services' Charles Rambolarison.

"The red flood warning is maintained in [the capital] Antananarivo but there is a clear withdrawal of water. The level of rivers in the capital has also declined," said Rambolarison.

Cyclone Ava made landfall Friday, but Rambolarison warned that "residents must remain vigilant."

Five major roads have been cut off by flooding and schools in Antanarivo have been closed since Friday.

In the last 10 years, Madagascar has been affected by 45 cyclones and tropical storms. In March 2017, Cyclone Enawo killed 78 people.