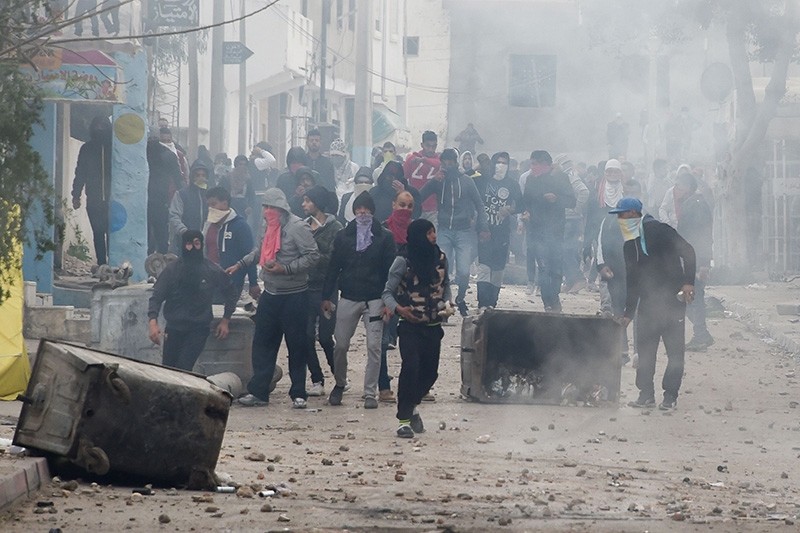 Tunisian protesters clash with security forces in the town of Tebourba on January 9, 2018, following the funeral of a man who was killed the previous day in a demonstration over rising costs and government austerity. (AFP Photo)
by Compiled from Wire Services Jan 10, 2018 12:00 am

More than 200 people were arrested and dozens hurt during clashes in several parts of Tunisia, the interior ministry said Wednesday, after a second night of unrest driven by anger over austerity measures.

Interior Ministry Spokesman Khalifa Chibani told local radio that 49 police officers were wounded during clashes across the North African country and that 206 "troublemakers" were arrested.

Properties were damaged, he said, including a branch of the Carrefour supermarket chain in the suburbs of Tunis that was looted and a car pound in Kasserine that was ransacked. Chibani added that buildings of the security forces were also damaged in the southern town of Hamma.

The unrest "had nothing to do with democracy or social demands," he told the Shems FM radio station.

Police and army forces were deployed in several cities during the night, including in Tebourba 30 kilometers (20 miles) west of the capital Tunis, where hundreds of young people took to the streets after the funeral of a man in his 40s who died in unrest on Monday night.

Police have insisted they did not kill the man and said he suffered from "respiratory problems". The results of an autopsy have not been made public.

Hundreds of young people took to the streets of Tebourba, pelting stones at security forces who responded by firing tear gas at them, an AFP journalist said.

Unrest was also reported in the southern city of Gafsa, in Kasserine in central Tunisia and in Sidi Bouzid, the cradle of the protests that sparked the 2011 Arab Spring uprisings.

A Jewish school on a Tunisian island that is home to an ancient Jewish community was attacked late on Tuesday, witnesses said.

Petrol bombs thrown at a Jewish school and synagogue on the tourist resort island of Djerba caused some damage but no injuries, the head of the local Jewish community, Perez Trabelsi, told Reuters.

There were no protests in Djerba but locals said the assailants had exploited the fact that there was a reduced security presence as police was busy elsewhere combating anti-government protests around the country.

"Unknown people took the opportunity of the protests and threw Molotov cocktails into the lobby of a Jewish religious school in Djerba," Trabelsi said.

During the time of the attack violent clashes were raging in some 20 Tunisian cities as people protested against rising prices and new taxes imposed by on Jan. 1.

Mainly Muslim Tunisia has a Jewish minority of fewer than 1,800 people. Jews have lived in Tunisia for over 2,000 years and Djerba is home to Africa's oldest synagogue, El Ghriba, which was hit by al Qaeda-linked militants in 2002 in a truck bomb attack that killed 21 people including 14 German tourists.

Tunisia has seen several days of demonstrations after activists and politicians denounced hikes in value-added tax and social contributions introduced at the start of the year as a tough new budget was implemented.

"The government is ready to listen, but every person wanting to demonstrate must do so peacefully," he said.

Protests are common in the North African state in the month of January, when Tunisians mark the anniversary of the 2011 revolt that unseated dictator Zine El Abidine Ben Ali.

Tunisia is widely seen as the sole democratic success story of the 2010-11 Arab Spring uprisings, which began in the town Sidi Bouzid in December 2010 after street vendor Mohamed Bouazizi set himself on fire and later died in a protest over unemployment and police harassment that spiraled into Ben Ali's overthrow.

The country has been hailed for its relatively smooth democratic transition but seven years after the revolution tensions over economic grievances are high. It has been in the grip of an economic slowdown resulting from the unrest that followed the 2010 revolt and a series of attacks by militant insurgents.

The government has defended the recent price and tax increases, saying they are necessary to revive the economy and curb budget deficit.

On Tuesday a peaceful rally of around a hundred people was held in the center of Tunis calling for the end of austerity measures that are expected to increase the cost of living.

"Poverty and hunger have increased, oh oppressed citizen!" chanted the protesters, most of them young people.

They listed their demands, including the suspension of the 2018 Finance Act and a return to earlier prices for commodities, said Hamza Nasri, of a campaign group leading the protests.

Hundreds of people, many of them very young, also demonstrated in Regueb, in the deprived central part of the country, said an AFP correspondent.

Finance Minister Ridha Chalghoum said the government intended to stick with its tax rises, but insisted the VAT hike did not impact "basic necessities".

"Among the achievements of democracy is the opportunity to demonstrate, but we also have an obligation to work for a healthy Tunisian economy," he told AFP.

January 2016 saw the biggest wave of public discontent since the uprising as the death of an unemployed protester in Kasserine sparked days of unrest.

In December, unemployed protesters and activists marched through the streets of Sidi Bouzid, angry over the lack of jobs and opportunities that continue to plague residents.