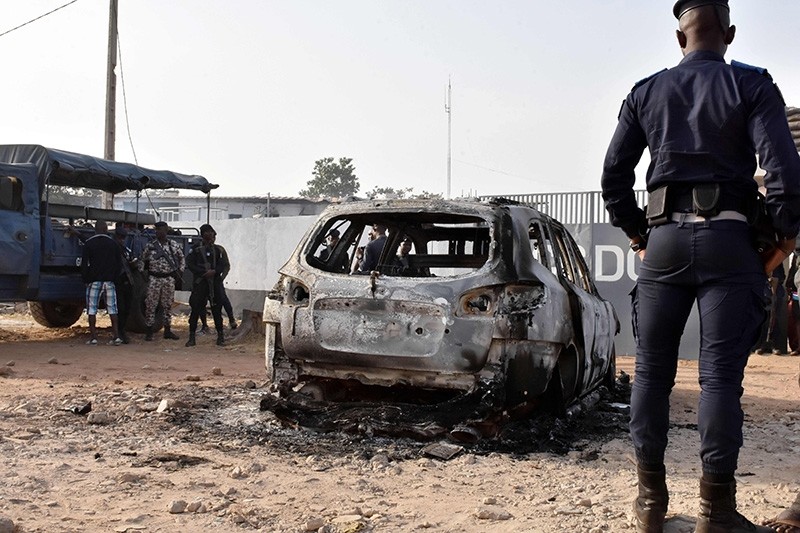 A gendarme stands in front of the wreckage of a burnt car, on Jan. 10, 2018 in front of the CCDO elite military unit center, a day after gunshots and heavy weapons fire erupted between rival factions within Ivory Coastu2019s army. (Reuters Photo)
by Jan 10, 2018 12:00 am

Soldiers in Ivory Coast's second largest city looted weapons from the base of an elite military unit overnight before setting it on fire, leaders of the faction said on Wednesday.

The soldiers, who were involved in a series of mutinies last year that tarnished the image of Ivory Coast, one of Africa's fastest growing economies, accuse the elite unit, known as the CCDO, of spying on them.

Residents of Bouake reported late on Tuesday hearing gunshots and heavy weapons fire between the rival factions, though they said the situation on Wednesday was calm after some early sporadic gunfire and businesses were operating normally.

"We entered the CCDO camp around midnight and took all of their arms and ammunitions," one of the faction's leaders, who asked not to be named, told Reuters. "Their troops fled the camp but we are looking for them."

A second leader of the former mutineers confirmed they had looted weapons stockpiles.

"We burned the CCDO camp and destroyed everything inside. Even their service vehicles were burned," the second faction leader said.

There were no immediate reports of any casualties. The CCDO is composed of soldiers, paramilitary gendarmes and police.

Ivory Coast's Defense Minister Hamed Bakayoko was not immediately available to comment on the clashes. Army officials reached by Reuters declined to comment.

Bouake, located in the central region of the west African nation, was the epicenter of several months of army mutinies last year that spread across the nation, forcing the government to yield to demands for bonuses and promotions.

Ivory Coast, the world's top cocoa grower, emerged from a decade-long political crisis as one of Africa's fastest growing economies and a darling of international investors.

But last year's instability laid bare the dangerous divisions that still persist within an army cobbled together from rival rebel and loyalist factions at the end of a 2011 civil war.