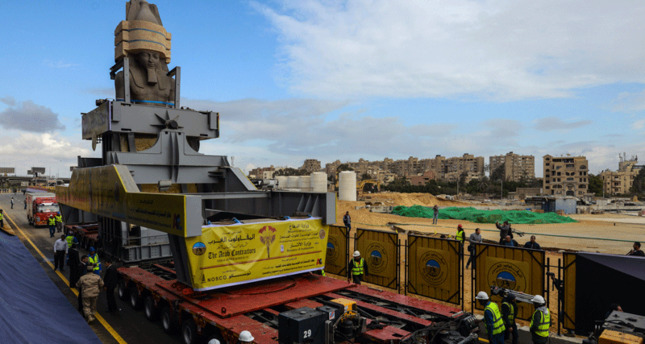 The 3,300-year-old colossal statue of King Ramses II is seen during its transfer to the main entrance of the Grand Egyptian Museum in Cairo's twin city Giza on January 25, 2018. (AFP Photo)

Egypt's Antiquities Ministry says it has placed the ancient colossus of famed pharaoh Ramses II at the entrance of a museum under construction near the country's famed pyramids outside the capital Cairo.

Thursday's placement of the colossus, which weighs over 80 tons and is some 12 meters (13 yards) high, occurred amid a great deal of fanfare and in the presence of Western and Egyptian officials.

The colossus, which dates back some 3,300 years, will be on display at the entrance of the Grand Egyptian Museum, which will house some of Egypt's most unique and precious ancient artifacts, including some belonging to famed boy King Tutankhamun. 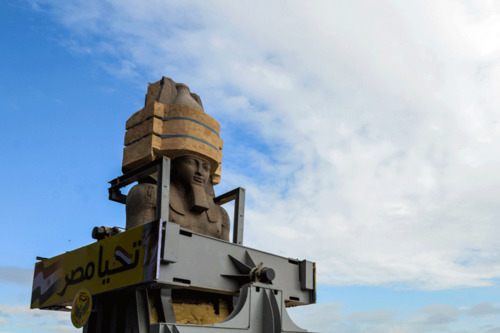 Another 87 artifacts will be placed at the museum's entrance, Antiquities Minister Khaled al-Anani said. The first phase of the museum will be inaugurated later this year.

"Today we celebrate having the first ancient piece in its final place in the Egyptian Grand Museum," al-Anani said. "It belongs to Rameses II that dates back to more than 3,000 years ago."

Ramses II, who was the third pharaoh of the Nineteenth Dynasty of Egypt, is often regarded as the greatest, most celebrated, and most powerful pharaoh of the Egyptian Empire. He ruled ancient Egypt for 66 years starting from 1279 BC.

He was famed for his military expeditions and monuments.

Described as the largest archeological museum in the world, the Grand Egyptian Museum, is a planned museum of artifacts of ancient Egypt.

The museum is under construction and is scheduled to be partially open in 2018 exhibiting some Tutankhamun collection with many pieces to be displayed for the first time.

The museum is located approximately two kilometers from the Giza pyramids. 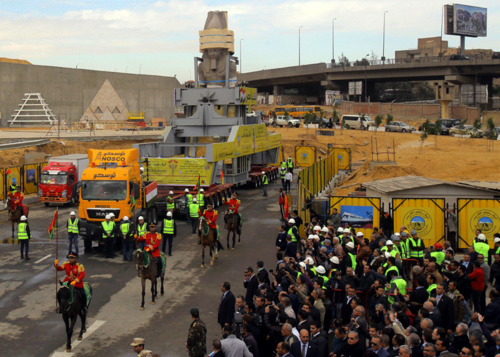 Share on Facebook Share on Twitter
Previous in Africa Almost a million children have fled violence in the eastern Congo,... Next in Africa Twenty-four people including mothers and babies were killed Thursday...
DAILY SABAH RECOMMENDS