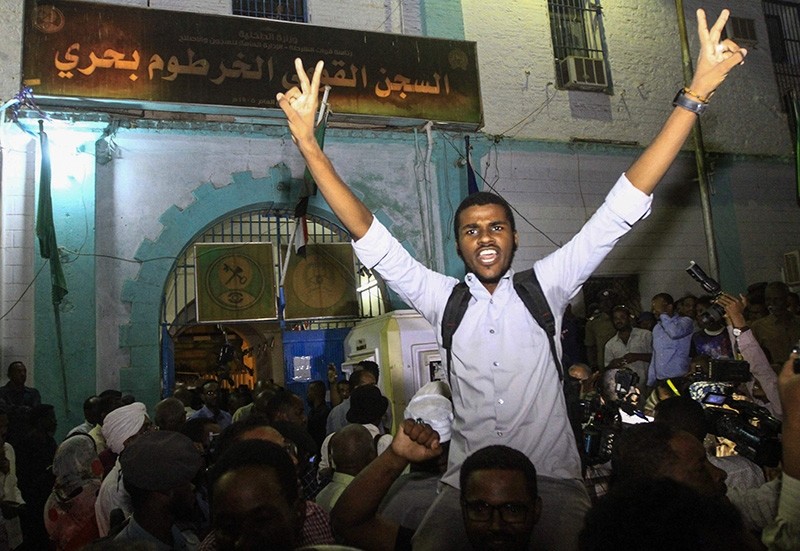 Family members shout slogans as they wait outside the Kobar prison in north Khartoum to welcome their loved ones after Sudan released dozens of opposition activists who were arrested last month. (AFP Photo)
by Compiled from Wire Services Feb 19, 2018 12:00 am

Addressing a press conference at Kober prison in the capital Khartoum, Alamahdi said that 80 prisoners were released today from the prison, adding that the rest of the detainees will be released when their procedures are finished.

"As we announced today, with the release of all political detainees, we do believe that this is a declaration of a new political era in our country, an era of freedoms and human rights," he stressed.

The opposition claimed earlier that more than 300 people were arrested during protests last month over price hikes after the government adopted austerity measures.

They were greeted and hugged by family members who had been waiting outside for several hours.

On Thursday, the U.S. embassy said that "hundreds of political leaders, activists and ordinary citizens" were being detained by Sudanese authorities.

Many of the detainees were being "held in inhumane and degrading conditions, and without access to lawyers or family", the embassy said in a statement.

Freed detainees said they were expecting their release due to the political situation in the country.

"But we are still not fully free because several of our colleagues are still detained," said Al-Sidiq Al-Sadiq, son of former premier Sadiq al-Mahdi, whose government was ousted by Bashir in a coup in 1989.

"The conditions that took us to jail have still not changed. There are still some laws that restrict freedoms."

During their detention, some prison officers had treated them well but "some did not," he said.

Sporadic protests have erupted since early January in Khartoum and some other parts of Sudan after the opposition and activists called for anti-government demonstrations to protest a surge in food prices.

Anti-riot police and security agents have so far swiftly managed to disperse the rallies.

Sudanese authorities are eager to prevent a repeat of deadly unrest that followed an earlier round of subsidy cuts in 2013.