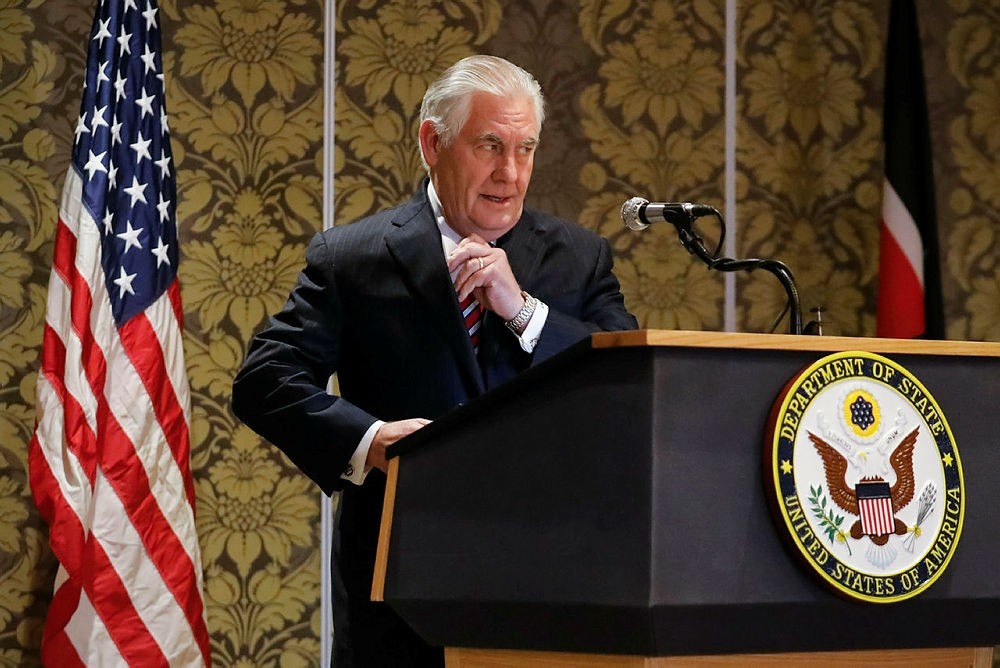 The United States has proposed an arms embargo against South Sudan in a bid to stop the ongoing conflict in the country, said U.S. Secretary of State Rex Tillerson on Friday.

"The U.S. believes that the arms embargo should be enforced and that is our position, let's be very clear on that," Tillerson, who is currently on a 3-day trip to Kenya, told a news conference in the Kenyan capital Nairobi.

The secretary of state said his visit to Africa is centered on the U.S. continued support for the democratic process in Kenya, refugee issues — especially those from Somalia and South Sudan — and press freedom.

He commended Kenyan President Uhuru Kenyatta and opposition leader Raila Odinga for agreeing to a truce and ending their rivalry, which led to the killing of more than 100.

The truce came just hours before Tillerson landed in Kenya on Friday.

For his part, Kenyatta told the U.S. secretary of state that his country needed help in fighting al-Shabaab militants in Somalia.

"Kenya calls on the U.S. to strongly consider the proposal, which was made almost three years ago, to have a surge operation in Jubba Valley region in order to root out al-Shabaab," Kenyatta said.

Speaking about South Sudan, Kenyatta said his country has remained fully engaged in finding a lasting solution and rejected claims that Kenya was supplying arms to South Sudan.

"We are committed to supporting the [Intergovernmental Authority on Development] IGAD High-Level Revitalization Forum, encouraging President Salva Kiir and the opposition to support the peace process, humanitarian assistance and the deployment of Regional Protection Force (RPF)," the president added.

Meanwhile, South Sudan's Media Authority, an independent body charged with regulating journalistic practices in the country, said it was shutting down Radio Miraya for "persistent non-compliance." They said the radio station was "not immune" to oversight.

"Radio Miraya opted not be regulated or questioned. They are operating in an environment of their own but they operate in the Republic of South Sudan where there are laws that need to be observed," said Elijah Alier, the Media Authority's managing director at a press conference.

Alier said they're not trying to censor the station but rather they are monitoring it for "hate speech and incitement." The government may not be able to take the station off the air because the transmitter is on the U.N. base in Juba.

U.N. spokesman Stephane Dujarric told reporters at U.N. headquarters in New York: "Our colleagues in South Sudan are in touch with the South Sudanese authorities to clarify the situation. At this point, the U.N. radio station is still broadcasting."