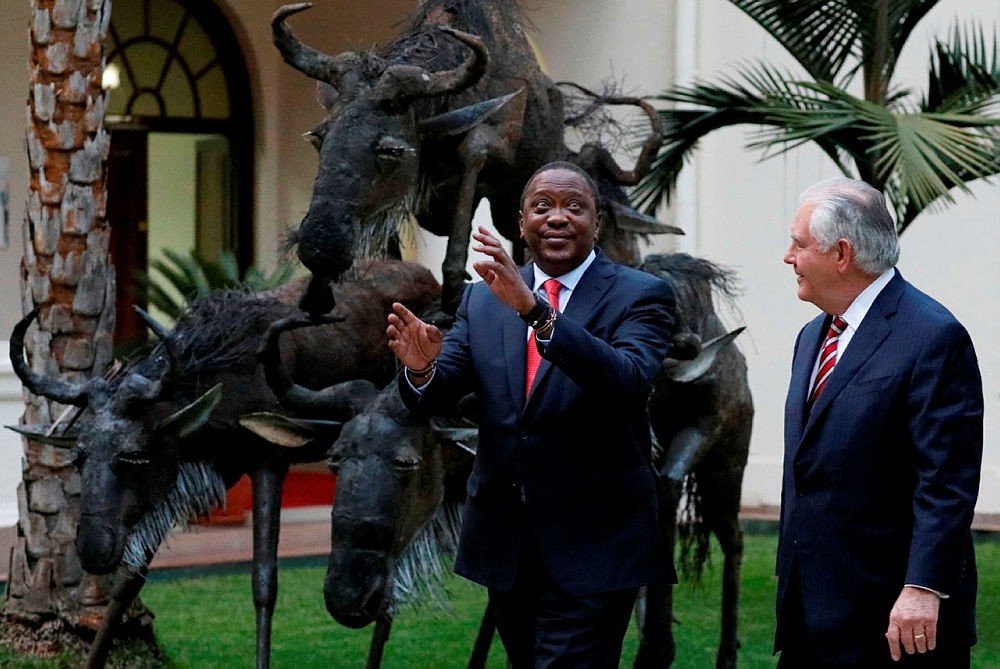 Kenya's President Uhuru Kenyatta (C) walks with U.S. Secretary of State Rex Tillerson after their meeting at the State House in Nairobi, on March 9, 2018. (AFP PHOTO)
by Associated Press Mar 11, 2018 12:00 am

On the outskirts of a sprawling reserve of Kenyan grasslands where endangered animals roam wild, U.S. Secretary of State Rex Tillerson lavished praise on an American-funded forensics lab that tracks down elephant-poachers for prosecution, and urged aggressive action in Africa on conservation.

Yet earlier this month, the Trump administration quietly lifted the U.S. ban on importing African elephant trophies, to the dismay of environmental groups who said it sends precisely the wrong message.

U.S. words and deeds are colliding as Tillerson travels across Africa. On trade policy, HIV/AIDS and humanitarian aid, the United States at times seems at odds with itself, muddying efforts to show it wants the continent to flourish and is here to help.

In the case of the elephants, conservationists appeared to have a powerful ally in President Donald Trump, who personally intervened last year to stop the U.S. Fish and Wildlife Service from lifting the Obama-era ban on tusks imported from Zambia and Zimbabwe. Trump took to Twitter to call the practice a "horror show."

At the forensics lab at Nairobi National Park, the only such lab in east and central Africa, Tillerson agreed Sunday when famed conservationist Richard Leakey warned that the "huge interest" in wildlife products such as elephant and rhinoceros parts was fueling the international trafficking trade.

"That's really the key, is to shut it all down," Tillerson said.

But three months after Trump's move to keep the ban in place, his administration reversed course again, saying elephant trophies could be imported on a "case-by-case basis." The U.S. agency said it chose that course of action to comply with a court ruling that said the Obama administration failed to follow proper procedure in enacting the original ban.

In Kenya, where the elephant population has plummeted to roughly one-fifth of what it was in the 1970s, the new Trump policy fell flat.

"The whole world is against it," said Paula Kahumbu, an elephant expert and CEO of Wildlife Direct, a leading Kenyan environmental group. She said past U.S. support for banning the ivory trade has pushed China and other nations to act as well. "To then say, 'Oh, but we have a special case for some of our people, they should be allowed to have ivory,' it totally undermines the U.S. leadership role."

American leadership has been repeatedly questioned since Trump took office in January 2017 as Washington pulls back from past commitments to NATO, to the United Nations and to aid programs that form the core of U.S. "soft power" diplomacy.

Tillerson's trip to Kenya was designed in part to highlight the success of PEPFAR, the 15-year-old HIV/AIDS program that has saved millions of lives and helped see the continent through an epidemic that once threatened to wipe out a whole generation. More than 13 million people with HIV in Africa are on lifesaving antiretroviral drugs thanks to PEPFAR, the U.S. has said.

So HIV/AIDS advocates are scratching their heads at why Trump has repeatedly proposed cutting hundreds of millions of dollars from PEPFAR. The nonprofit ONE Campaign warned that the cut would lead to hundreds of thousands more people dying of AIDS each year.

The Trump administration has said despite those reductions, it believes there's enough money left "to maintain all current patient levels" — meaning to not cut off anyone's lifesaving medications. But public health groups say they can't understand why U.S. would pull back from the President George W. Bush-era program at the very moment when Tillerson says the world "can actually now see a future free of HIV/AIDS."

Visiting the African Union headquarters in Ethiopia earlier in his trip, Tillerson urged officials not to go ahead with a plan to impose a 0.2 percent tariff on imports. The goal is to help the AU become financially self-sufficient, but the U.S. is concerned the plan runs afoul of the World Trade Organization, thus keeping U.S. companies out of the African market.

The timing for Tillerson's push was inauspicious: Trump is in the midst of going ahead with steep trade penalties on aluminum and steel imported to the U.S.