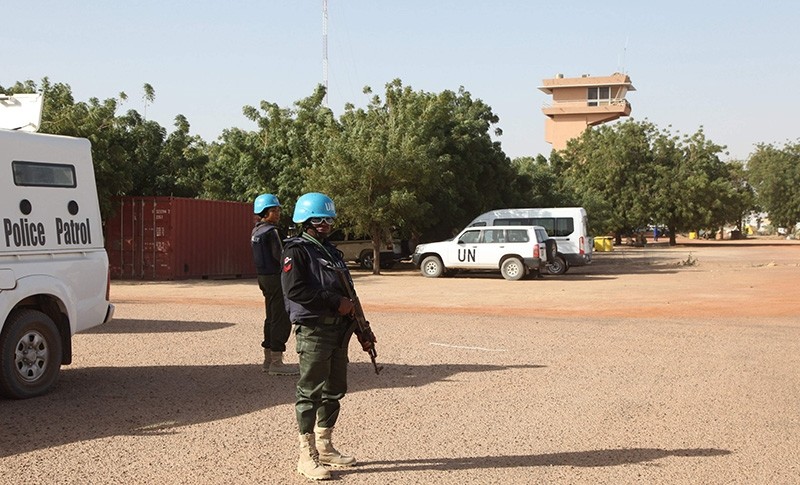 At least one peacekeeper has been killed and several more injured when suspected terrorists dressed as United Nations peacekeepers attacked two bases in northern Mali with rockets and car bombs.

The attackers fired a dozen rockets at the bases of the U.N. peacekeeping mission in Mali, Minusma, and the French-led Operation Barkhane, Mali's security ministry said in a statement on Sunday. The attack took place on Saturday afternoon, near Timbuktu's airport.

Around 15 militants were killed in the attack, the French military told AFP on Sunday.

The attackers wore blue helmets and drove vehicles marked with the U.N. acronym. Their vehicles were also rigged with explosives. One of the vehicles exploded, while the other was intercepted by troops.

Ten troops in the Barkhane camp were injured, with five seriously wounded. One Malian soldier was killed, while two others were injured, the statement said.

France said seven of its soldiers were hurt, lowering an initial toll from Malian authorities who had said a dozen French troops were wounded.

Security forces are still searching for the attackers.

MINUSMA head Mahamat Saleh Annadif praised the peacekeepers who "valiantly repulsed in close coordination with the international forces" this "massive and far-reaching attack."

"This attack illustrates once again the cowardice for terrorist groups in the face of which the United Nations and their partners continue to stand opposed with unfailing determination," he said in a statement.

French military spokesman Patrik Steiger said the attackers had "failed in their objective of causing the maximum damage possible."

"Around 15 [attackers] were killed," he added, some of them outside the military camp's outer walls.

"Some attackers managed to enter, including some disguised as peacekeepers," he said, adding that friendly fire was not involved.

Mali's security ministry said Saturday the assailants had tried to detonate two car bombs, one of them a vehicle in the colors of the Malian armed forces and the other carrying the U.N. logo.

The first exploded while troops managed to immobilize the second, the ministry said.

The French military said there had been three car bombs.

Steiger said allied troops managed to regain control with the help of fighter jets sent from a French base in neighboring Niger as well as helicopters carrying elite troops.

"By dawn the situation was stable," he said.

Mali's unrest stems from a 2012 Tuareg separatist uprising against the state which was exploited by terrorists in order to take over key cities in the north.

More than a dozen of Timbuktu's holy shrines, built in the 15th and 16th centuries when the city was revered as a center of Islamic learning, were razed in a campaign against idolatry by Al-Qaeda-linked terrorists.

The extremists were largely driven out in a French-led military operation launched in January 2013.

But vast stretches of the country remain out of the control of Malian, French and U.N. forces, which are frequent targets of attacks.

The U.N.'s Timbuktu Super Camp, where Saturday's attack took place, was already the scene of an assault last May which killed a Liberian peacekeeper and wounded nine.

In August 2017, armed men launched another assault on the camp, which hosts MINUSMA contingents from numerous countries. Seven security force members and six attackers were killed, according to the U.N.