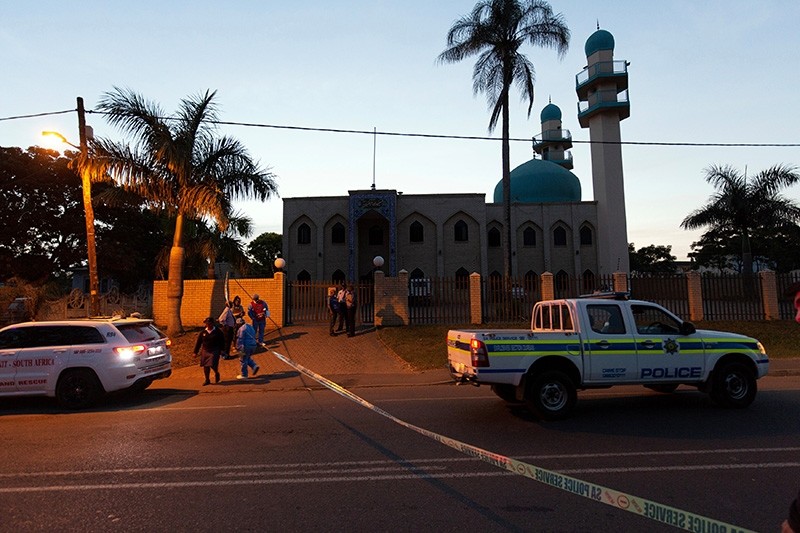 Police investigators collect evidence at a mosque where three men where attacked in Ottawa, South Africa May 10, 2018. (Reuters Photo)
by Compiled from Wire Services May 10, 2018 12:00 am

Attackers armed with guns and knives struck a mosque outside the South African city of Durban on Thursday, slashing the throats of three people, killing one and critically injuring the other two.

Three men entered the large mosque after midday prayers, carrying guns and attacking the victims with knives and then releasing a petrol bomb that set fire to the building.

Police said the attackers remained at large after escaping in a Hyundai car from the Imam Hussain mosque in Verulam town, on the outskirts of the eastern port city.

"There were three people in the mosque -- a caretaker, a worshipper and the imam and they were held up by three armed men," Paul Herbst, spokesman for the private IPSS medical rescue service, told AFP.

"The (imam) was tied up and thrown to his knees and his throat was slit. The other two men were also stabbed -- one was stabbed in the abdomen and the other in the groin of his left leg," he said.

"The imam, who had his throat slit, passed away a few minutes ago due to his injuries," he added. The imam was treated by paramedics on the scene and transferred to hospital where he was pronounced dead.

"The motive of the attack is unknown at this stage. Verulam police are investigating three counts of attempted murder and arson," police spokeswoman Nqobile Gwala said in a statement.

The incident appeared to be unprecedented in South Africa, where about 1.5 percent of the country's 55 million population is Muslim.

Prem Balram, spokesman for the Reaction Unit South Africa security company, said he had arrived at the mosque to find two victims covered in blood lying in the forecourt of the mosque.

He said a third victim had been attacked inside the building and had jumped out of a window when it was set alight.

"There have been theft and robbery incidents at mosques before, but not like this, when nothing appears to have been taken."

The Muslim holy month of Ramadan is due to start next week.

"It is the first time anything like this has happened in South Africa, let alone in KwaZulu-Natal province," Faizel Suliman, chairman of the SA Muslim Network, told AFP.

"It was a sudden attack and at this point we don't have enough information. Speculation about the motive is quite dangerous at this point."

"A mosque is a religious institution, and South Africa's constitution guarantees and protects the right to religious practices," its chairman Francois Beukman said.