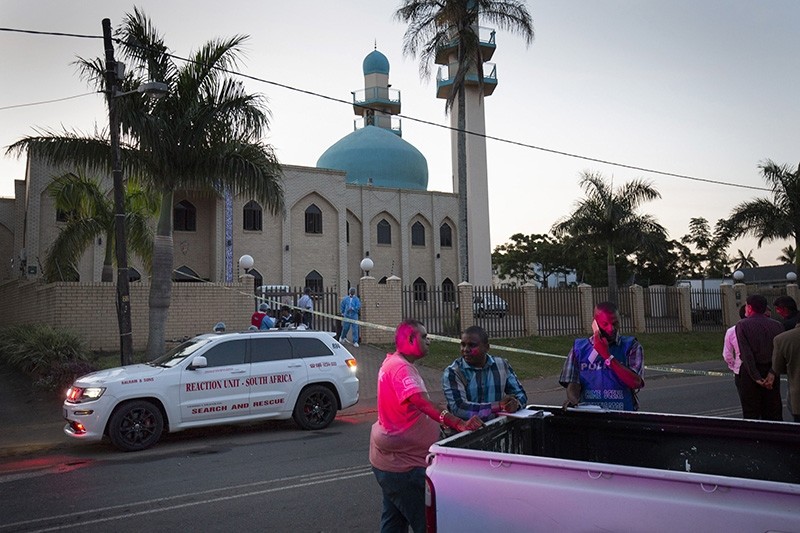 Police officers stand outside the Imam Hussain Mosque where three members of the clergy where attacked with knives, hours earlier, in Durban, South Africa, May 10, 2018. (EPA Photo)
by Daily Sabah with AFP May 11, 2018 12:00 am

South African police hunting for three men who stabbed worshipers at a mosque outside Durban said Friday that the attackers' motive was unknown but "elements of extremism" were involved.

One Muslim leader said the mosque, a Shia place of worship, had received previous threats and that the attack bore telltale signs of the Daesh terror group.

Three attackers killed one man by slitting his throat and injured two others after midday prayers on Thursday at the mosque in Verulam town on the outskirts of the eastern port city of Durban.

"There are elements of extremism," Simphiwe Mhlongo, spokesman for the Hawks police unit, told AFP. "It shows hatred toward the worshipers."

Local Islamic leader Aftab Haider said the Shia community in South Africa had been victim to a prolonged hate campaign.

Haider said the attack had "all the hallmarks" of the Daesh terror group.

"There [has been] a huge organized hate campaign in different mosques, radio stations and on social media against the Shia community," he said.

"There have been threats at this mosque before, but not in the weeks leading up to this incident. It has all the hallmarks of the ISIS-style of operations in Iraq and Syria," Haider said, using an alternative acronym for Daesh.

The assailants, who also set off a petrol bomb inside the mosque, escaped in a car after the attack.

The blood-soaked victims were found lying in the forecourt of the mosque by emergency services.

"These people were not robbers. They did not want cellphones, they did not want laptops or money," said Ali Nchinyane, who was stabbed in the abdomen, speaking at a news conference on Friday.

"One of the suspects told me 'I will kill you.' If I did not fight, I would have been dead," Nchinyane added, saying he used a martial arts weapon to defend himself.

Police spokesman Mhlongo added that a major hunt was underway to find the attackers.

"The whole law enforcement forces are out, including private security, local detectives and police," he said.

The incident appeared to be unprecedented in South Africa, where about 1.5 percent of the country's 55-million population is Muslim.

The country prides itself on religious tolerance and has little record of violence related to religion.

"A mosque is a religious institution, and South Africa's constitution guarantees and protects the right to religious practices," its chairman Francois Beukman said.

"We want our communities to live in harmony, practicing their religions without fear."