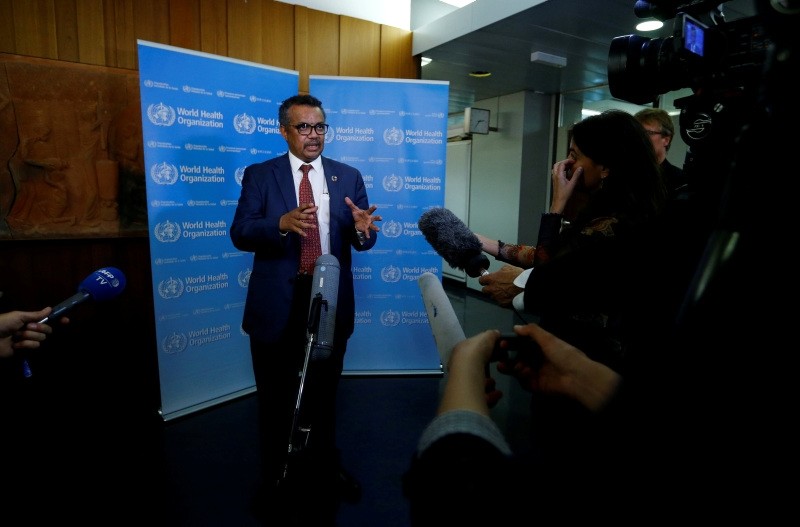 Director-General of the WHO Tedros Adhanom Ghebreyesus briefs the media on the Ebola outbreak at their headquarters in Geneva, Switzerland, May 14, 2018. (REUTERS Photo)
by Compiled from Wire Services May 18, 2018 12:00 am

The number of suspected, probable and confirmed Ebola cases in the Democratic Republic of Congo has risen to 45, with 25 people dead, the World Health Organization said Friday.

WHO spokesman Tarik Jasarevic, who gave the figures to reporters in Geneva, said that 14 of the cases had been confirmed as the deadly Ebola virus following laboratory tests.

As the number of confirmed cases rise in Congo's latest Ebola outbreak, health officials are rushing to contain the often deadly virus in a city of more than 1 million. The World Health Organization was holding an experts' meeting Friday to determine whether the epidemic warrants being declared a global health emergency.

WHO now calls the risk to the public in Congo "very high" and the regional risk high, with the global risk low. The Republic of Congo and Central African Republic are nearby.

Vast, impoverished Congo has contained several past Ebola outbreaks but the spread of the hemorrhagic fever to an urban area poses a major challenge. The city of Mbandaka, which has one confirmed Ebola case, is an hour's flight from the capital, Kinshasa, and is located on the Congo River, a busy travel corridor.

"The outbreak is potentially a public health emergency because many of the criteria have been met," said Dr. David Heymann, a former WHO director who has led numerous responses to Ebola.

For a health crisis to constitute a global health emergency it must meet three criteria stipulated by WHO: It must threaten other countries via the international spread of disease, it must be a "serious, unusual or unexpected" situation and it may require immediate international action for containment. 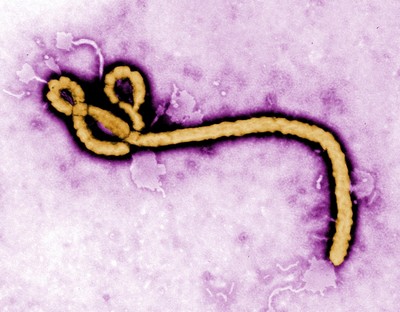 Ebola has twice made it to Congo's capital in the past and was rapidly stopped. Congo has had the most Ebola outbreaks of any country and Heymann said authorities there have considerable expertise in halting the lethal virus.

The latest outbreak tests the new experimental Ebola vaccine, which proved highly effective in the West Africa outbreak a few years ago, although the vaccine was used long after the epidemic had peaked. More than 4,000 doses have arrived in Congo this week, with more on the way, and vaccinations are expected to start next week. One challenge will be keeping the vaccine cold in a region with poor infrastructure and patchy electricity.

Just one Ebola death in the current outbreak has been confirmed so far. Congo's health ministry late Thursday said the total number of cases is 45, including 10 suspected and 21 probable ones.

The health ministry said two new deaths have been tied to the cases, including one in a suburb of Mbandaka. The other was in Bikoro, the rural area where the outbreak was announced last week. It is about 150 kilometers (93 miles) from Mbandaka.

"This is a major, major game-changer in the outbreak," Dr. Peter Salama, WHO's emergency response chief, warned on Thursday after the first urban case was announced. "Urban Ebola can result in an exponential increase in cases in a way that rural Ebola struggles to do."

Until now, the outbreak had been confined to remote rural areas, where Ebola, which is spread via contact with bodily fluids of those infected, travels more slowly.

Doctors Without Borders said 514 people believed to have been in contact with infected people were being monitored. WHO said it was deploying about 30 more experts to Mbandaka.

Amid fears of the outbreak spreading to neighboring countries, the U.N. migration agency said Friday it would support the deployment of Congolese health teams to 16 entry points along the nearby border with the Republic of Congo for infection control and prevention.

The U.N. children's agency said it was mobilizing hundreds of community workers to raise awareness on protection against the disease.

This is the ninth Ebola outbreak in Congo since 1976, when the disease was first identified. The virus is initially transmitted to people from wild animals, including bats and monkeys.

There is no specific treatment for Ebola. Symptoms include fever, vomiting, diarrhea, muscle pain and at times internal and external bleeding. The virus can be fatal in up to 90 percent of cases, depending on the strain.