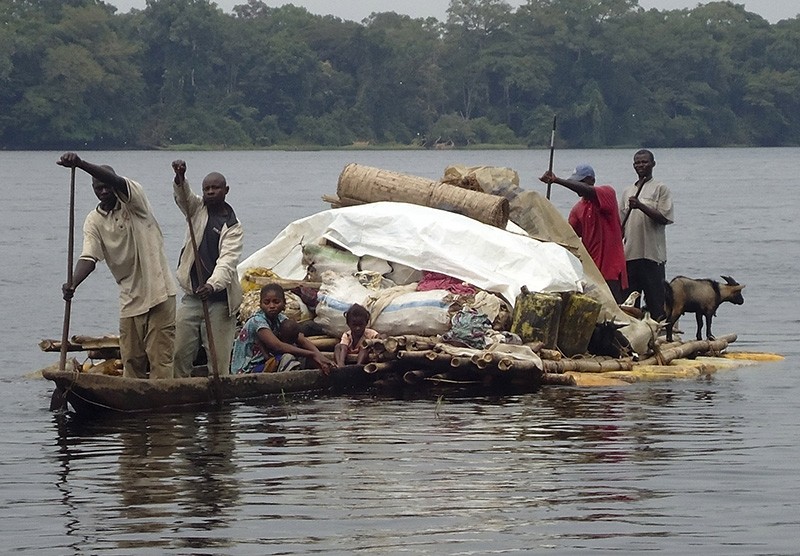 Handout photo dated Aug. 24, 2010 and made available by U.N.-backed Radio Okapi shows Congolese villagers crossing the Ruki river on a small canoe in Balongo, in Equateur, northwestern province of the Democratic Republic of the Congo. (EPA Photo)
by French Press Agency - AFP
May 25, 2018 12:00 am

Fifty people died in a boat accident on a river in remote northwestern Democratic Republic of Congo (DRC), officials said on Friday.

The accident happened on the Momboyo river Wednesday night, Richard Mboyo Iluka, vice governor of Tshuapa province, told AFP, saying: "We found 49 bodies on Thursday and another one this morning."

The boat had been transporting passengers and a large amount of goods from the town of Monkoto to the city of Mbandaka in Equateur province, local residents said.

"The causes of the sinking and the number of people missing are not yet known. The provincial government has already sent a team there to find out more," Mboyo said.

He added, however, that the boat had been traveling by night -- something that is illegal under government safety measures -- and did not have lights.

Accidents are a frequent hazard on the DRC's rivers and lakes, due to decrepit boats, overloading, lack of safety equipment and the fact that few Congolese know how to swim.

In February, at least 14 people were reported missing when two boats sank on the Congo River.

In Mbandaka, a city of 1.2 million people, families on Friday mourned those who died in the accident.

"My brother, his wife and their son were on the boat. I have not found their bodies, but there is no sign that they are alive," said Bienvenu, a mechanic.

The Equateur province has separately been affected by an outbreak of Ebola that began in Bikoro, 600 km north of Kinshasa, and has spread to Mbandaka.

The outbreak, officially declared on May 8, has so far killed 22 people, with 52 cases reported as of May 23, according to the latest figures from Congolese health ministry.

"Why are all these misfortunes happening at the same time here in Equateur? We have not yet finished with Ebola, and then many people die like this," said another resident, who identified himself as Gilbert. "It's mysterious."

Most of the region's population rely on boats that crisscross the many rivers and lakes as a low-cost form of transport.

But in the absence of an organized public transport system, private businesses have invested in the sector.

At least 14 people were missing after two boats sank on the Congo River in February.