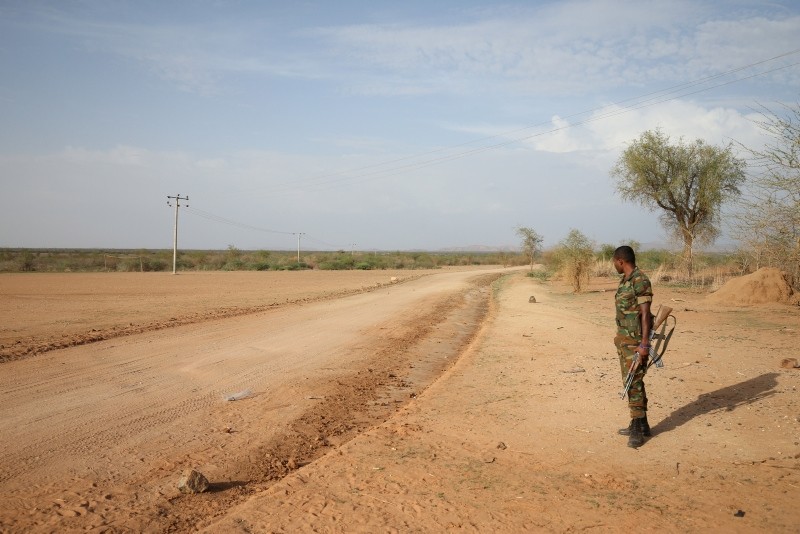 An Ethiopian military officer stands guard in the outskirts of Badme, a territorial dispute town between Eritrea and Ethiopia currently occupied by Ethiopia June 8, 2018. (Reuters Photo)
by Associated Press Jun 20, 2018 12:00 am

This is the first such delegation Eritrea has sent since 1998, when a border war erupted between the countries.

Longtime President Isaias Afwerki announced the news Wednesday morning during a Martyrs Day celebration in the capital, Asmara, Eritrean ambassadors said on social media. The ambassador to Kenya, Byene Russom, called it a "new chapter of peace and reconciliation between the Eritrean and Ethiopian people."

Ethiopia early this month announced it will fully accept the terms of Algiers Agreement with Eritrea signed in 2000 to end the two-year border war that killed tens of thousands. The countries have skirmished a number of times since then. Ethiopia had refused to accept the deal's handing of key locations, including Badme, to Eritrea and continues to control that town.

The decision to fully accept the peace deal was the biggest and most surprising reform yet announced by Ethiopia's young new Prime Minister Abiy Ahmed. "The suffering on both sides is unspeakable because the peace process is deadlocked. This must change for the sake of our common good," Abiy's chief of staff, Fitsum Arega, said at the time.

Ethiopia has said its decision is aimed at ending the stalemate and rejuvenating ties between the two countries. Eritrea shortly after the announcement replied that it had always accepted the peace deal.

On Wednesday Eritrea's ambassador to Japan, Estifanos Afeworki, said on Twitter that the delegation being sent to Ethiopia will pursue "constructive engagement."

Tiny Eritrea is one of the world's most closed-off nations, ruled by Afwerki since gaining independence from Ethiopia in 1993 after years of rebel warfare. Eritrea has become a major source of migrants fleeing toward Europe, Israel and African nations in recent years as human rights groups criticize its harsh military conscription laws.