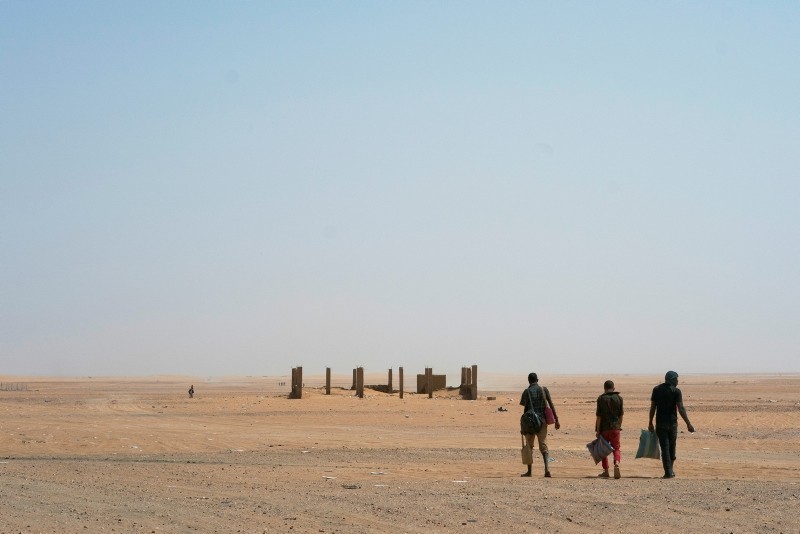 Algeria has abandoned more than 13,000 people in the Sahara Desert over the past 14 months, including pregnant women and children, expelling them without food or water and forcing them to walk, sometimes at gunpoint, under a blistering sun. Some never make it out alive.

The expelled migrants can be seen coming over the horizon by the hundreds, appearing at first as specks in the distance under temperatures of up to 48 degrees Celsius (118 degrees Fahrenheit).

In Niger, where the majority head, the lucky ones limp across a desolate 15-kilometer no-man's-land to the border village of Assamaka. Others wander for days before a U.N. rescue squad can find them. Untold numbers perish; nearly all of the more than two dozen survivors interviewed by The Associated Press told of people in their groups who simply vanished into the Sahara.

"Women were lying dead, men..... Other people got missing in the desert because they didn't know the way," said Janet Kamara, who was pregnant at the time. "Everybody was just on their own."

In a voice almost devoid of feeling, she recalled at least two nights in the open before her group was rescued, but said she lost track of time.

"I lost my son, my child," said Kamara, who is Liberian.

Another woman in her early twenties also went into labor and lost her baby, she said.

Algeria's mass expulsions have picked up since October 2017, as the European Union renewed pressure on North African countries to head off migrants going north to Europe via the Mediterranean Sea or the barrier fences with Spain.

A European Union spokesperson said the EU was aware of what Algeria was doing, but that "sovereign countries" can expel migrants as long as they comply with international law. Unlike Niger, Algeria takes none of the EU money intended to help with the migration crisis, although it did receive $111.3 million in aid from Europe between 2014 and 2017.

Algeria provides no figures for its involuntary expulsions. But the number of people crossing on foot to Niger has been increasing since IOM started counting in May 2017, when 135 people were dropped, to as high as 2,888 in April 2018. In all, according to the IOM, a total of 11,276 men, women and children survived the march.

At least another 2,500 were forced on a similar trek into neighboring Mali, with an unknown number succumbing along the way.

The migrants AP talked to described being rounded up hundreds at a time, crammed into trucks for hours to what is known as Point Zero, then dropped in the desert and pointed toward Niger. They walk, sometimes at gunpoint.

"There were people who couldn't take it. They sat down and we left them. They were suffering too much," said Aliou Kande, an 18-year-old from Senegal.

Kande said nearly a dozen people gave up, collapsing in the sand. His group of 1,000 wandered from 8 a.m. until 7 p.m., he said. He never saw the missing people again.

"They tossed us into the desert, without our telephones, without money," he said.

The migrants' accounts are confirmed by videos collected by the AP over months, which show hundreds of people stumbling away from lines of trucks and buses, spreading wider and wider through the desert. Two migrants told AP gendarmes fired on them, and multiple videos seen by AP showed armed, uniformed men standing guard.

Liberian Ju Dennis filmed his deportation with a phone he kept hidden on his body. It shows people crammed on the floor of an open truck, vainly trying to shade their bodies from the sun and hide from the gendarmes. He narrated every step of the way in a hushed voice.

"You're facing deportation in Algeria — there is no mercy," he said. "I want to expose them now...We are here, and we saw what they did. And we got proof."

Algerian authorities refused to comment. But Algeria has in the past denied criticism that it is committing rights abuses by abandoning migrants in the desert, calling the allegations a "malicious campaign" intended to inflame neighboring countries.

The Sahara is a swift killer that leaves little evidence behind. The International Organization for Migration has estimated that for every migrant known to have died crossing the Mediterranean, as many as two are lost in the desert — potentially upwards of 30,000 people since 2014.

The vast flow of migrants puts an enormous strain on all the points along the route.

"They come by the thousands. This time, the expulsions that I'm seeing, I've never seen anything like it," said Alhoussan Adouwal, an IOM official who has taken up residence in Assamaka to send out the alert when a new group arrives. He then tries to arrange rescue for those still in the desert. "It's a catastrophe."

Most choose to leave by IOM bus for the town of Arlit, about 6 hours to the south through soft sand. And then on to Agadez, the Nigerien city that has been a crossroads for African trade and migration for generations. Ultimately, they will return to their home countries on IOM-sponsored flights.

Even as these migrants move south, they cross paths with some who are making the trip north toward Algeria and Europe.

Every Monday evening, dozens of pickups filled with the hopeful pass through a checkpoint at the edge of the city. They are fully loaded with water and people gripping sticks, their eyes are firmly fixed on the future.