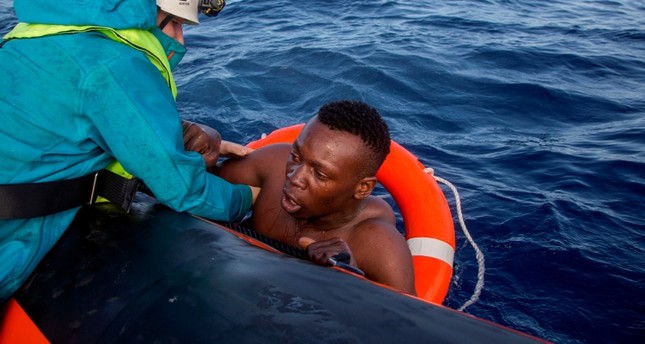 A member of German NGO Sea-Watch (L) helps a migrant to board a boat after he was recovered in the Mediterranean Sea on November 6, 2017. (AFP Photo)

Around 100 migrants are feared dead after their boat capsized off the Libyan coast on Friday, the country's navy official says.

"It is not clear yet if the 100 have drowned," spokesman for the Libyan navy Ayoub Qasim told dpa. "We are still waiting for a word on their fate from a navy boat in the area."

Qasim added that 14 others, who were in the boat when it capsized off the capital Tripoli, have been saved.

The exact number of migrants aboard the boat at the time of the incident is not known yet.

Libya has emerged as a major transit point to Europe for those fleeing poverty and civil war elsewhere in Africa and the Middle East. Traffickers have exploited Libya's chaos following the 2011 uprising that toppled and later killed longtime dictator Moammar Gadhafi.

Meanwhile, the U.N.'s migration and refugee agencies praised a European Union deal about taking in migrants from across the Mediterranean region, while cautioning that details need to be specified and pointing out that the involvement of the African Union is "indispensable."

Leonard Doyle, spokesman for the International Organization for Migration, said it was "very pleased at the solidarity and consensus" that emerged from an EU summit in Brussels, in particular with the "front line states" like Italy.

Doyle said he believed that most of the "disembarkation centers" planned by the EU would be in Europe, though he said it was up to the EU to determine which countries would host them.

Charlie Yaxley, a spokesman for refugee agency UNHCR, said it was "still awaiting the legal analysis" of the summit's outcome, but would welcome greater collaboration on asylum.

He noted that recently, for the fifth year in a row, the "grim milestone" of 1,000 migrant deaths in the Mediterranean was crossed.