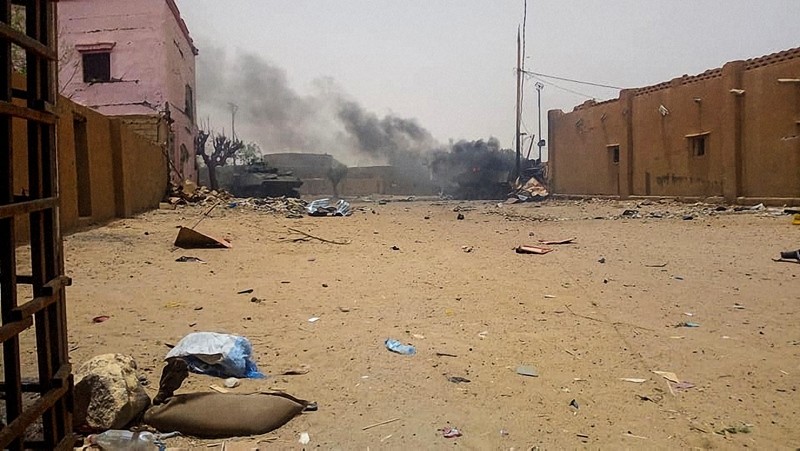 French soldiers on patrol in troubled northern Mali were targeted in a bombing on Sunday in which four civilians were killed and over 20 people injured, Malian authorities said.

"French soldiers of the Barkhane military operation were ambushed by terrorists" near the town of Bourem, a Western military source told AFP.

One local source said a car bomb was detonated targeting a French and Malian patrol which then came under fire.

"There were several wounded among the French soldiers who were in two vehicles that were completely destroyed by the explosion. They were evacuated to their base," a local army source said.

In a separate incident on Sunday meanwhile, a vehicle of the Movement for the Salvation of Azawad (MSA), an armed group of former touareg rebels which often operates alongside French and Malian forces in Mali's north, also hit a landmine in Talataye village in the Gao region.

That blast killed four people and injured three, the group said in a statement.

The attacks, coming in the wake of two others on Friday and Saturday, highlighted the fragile security situation in the West African nation as it prepares to go to the polls on July 29.

Sunday's attacks occurred as an African Union summit opened in neighboring Mauritania, with security crises on the continent, including unrest in the vast Sahel region, high on the agenda.

On Friday, a suicide bombing hit the Mali headquarters of the five-nation force known as G5 Sahel, adding to concerns about how it can tackle the militant groups roaming the region.

The French military said there were no deaths among the troops whose armored vehicle was attacked near the town of Bourem in the Gao region on Sunday, but that there were civilian casualties.

"A blast of unknown origin took place and there is a large number of civilian casualties, including children," military spokesman colonel Patrik Steiger told AFP.

"An armored vehicle blocked the way and the car blew up," she said.

Another resident told AFP that the area around the ambush had been sealed off by French troops.

Mauritanian President Mohamed Ould Abdel Aziz, whose country is part of the G5 and is hosting the two-day African Union summit, warned that Friday's attack on the Sahel force HQ had exposed regional security failings.

He said the blast "hit the heart" of the region's security and lashed out at a lack of international help, saying the doors of the United Nations were "closed."

"It was a message sent by the terrorists at this precise moment when we are getting organized to stabilize and secure our region," Aziz told France 24 television.

"If the headquarters was attacked, it is because there are so many failings we need to fix if we want to bring stability to the Sahel."

An Al-Qaeda-linked group claimed Friday's bombing in a telephone call to the Mauritanian news agency Al-Akhbar.

And on Saturday, four Malian soldiers were killed when their vehicle drove over a landmine in the central Mopti region.

The G5 aims to have a total of 5,000 troops from five nations -- Burkina Faso, Chad, Mali, Mauritania and Niger -- but has faced funding problems and accusations of human rights abuses.

French President Emmanuel Macron will meet G5 leaders in Nouakchott on Monday to focus on progress made by the force.

G5 operates alongside France's 4,000 troops in the troubled "tri-border" area where Mali, Niger and Burkina Faso meet, and alongside the U.N.'s 12,000-strong MINUSMA peacekeeping operation in Mali.

African leaders will also look at a planned ceasefire in South Sudan's civil war and at the detente between Ethiopia and Eritrea, whose relations have been poisoned for decades.

Rwandan President Paul Kagame, who holds the presidency of the 55-nation AU, will make a call to promote free trade.

Mali votes on July 29 in a presidential election in which incumbent President Ibrahim Boubacar Keita will face more than a dozen challengers.

Thousands of people have taken to the streets in banned opposition protests.

Mali's unrest stems from a 2012 ethnic Tuareg separatist uprising, which was exploited by terrorists in order to take over key cities in the north.

The extremists were largely driven out in a French-led military operation launched in January 2013.

But large stretches of the country remain out of the control of the foreign and Malian forces, which are frequent targets of attacks, despite a peace accord signed with Tuareg leaders in mid-2015 aimed at isolating the terrorist groups.

The violence has also spilled over into both Burkina Faso and Niger.