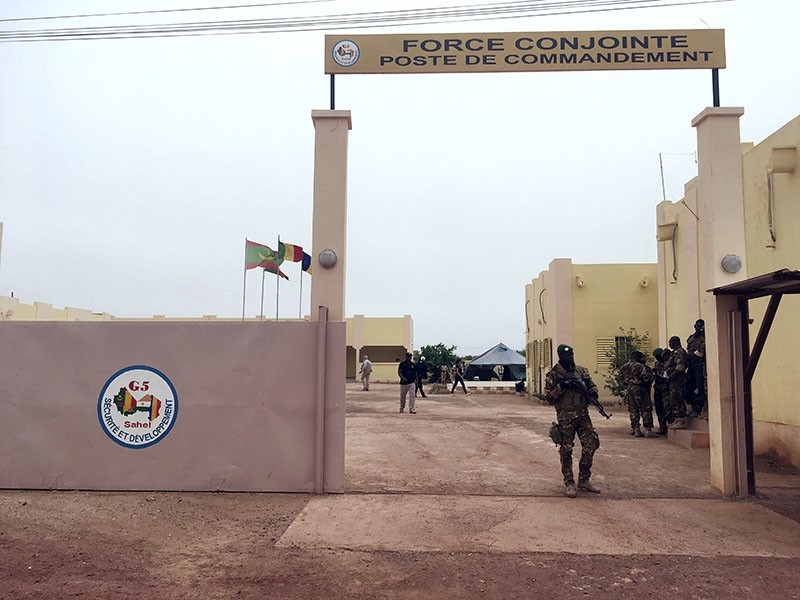 In this Wednesday, May 30, 2018 file photo, a member of the army stands guards at the entrance of the headquarters of a new, five-nation West African counter-terror force, in Mali. (AP Photo)
by reuters Jul 24, 2018 12:00 am

An airport in central Mali was hit by shells, the regional governor said on Tuesday, the latest unrest just days before the country votes for a president.

No one claimed responsibility for the attack overnight, but militant groups with links to al Qaeda and Daesh have intensified deadly raids this year across the desert of central and northern Mali, parts of which have become ungovernable.

The government has repeatedly said the election, due on July 29, will go ahead despite the turmoil. President Ibrahim Boubacar Keita is bidding for a second term, facing former finance minister Soumaila Cisse and two dozen other candidates.

While the militants have not specifically threatened the running of the vote, the violence threatens to seriously dent turnout in polls that some observers hoped would chart a way out of years of political and ethnic unrest.

The extent of any damage at the airport near the town of Sevare was not immediately clear but an airport technician at the scene said there were no casualties.

Ambodedjo Airport is the only terminal serving the regional capital of Mopti. The city is home to the headquarters of the G5, an African military taskforce tasked with rooting out militants in the West Africa Sahel region.

Six people were killed in Mopti city last month when militants raided the headquarters of the G5, a sign emboldened terrorist movements are stretching further south.

"They fired on Sevare's Ambodedjo Airport around midnight," the governor of the Mopti region, General Sidi Alassane Toure, said. The technician at the scene confirmed that shells were fired on the site.

Mali has been in turmoil since Tuareg rebels and loosely allied militants took over its north in 2012, prompting French forces to intervene to push them back the following year. Those groups have since regained a foothold and used the lawless area to launch attacks across West Africa.