2 killed in attack on headquarters of Libyan state oil firm 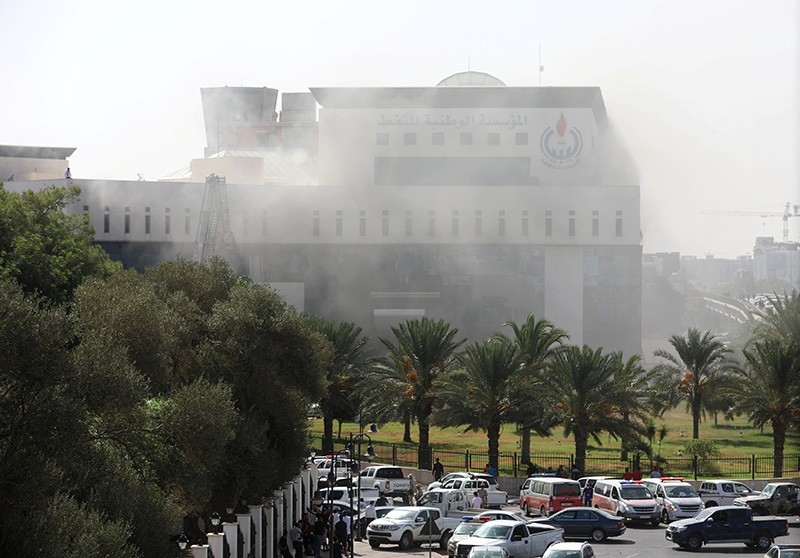 Two people were killed and 10 injured when gunmen attacked the headquarters of the National Oil Corporation (NOC) in the Libyan capital Tripoli on Monday, according to health ministry figures.

Interior Ministry spokesman Ahmed Salem told Libya TV that the two killed were security guards at the company. Health official Malek Merset had earlier said that dozens were wounded from the gunfire, smoke inhalation or the explosions.

At least one explosion rocked the building soon after the gunmen stormed it, starting a fire that swiftly spread through the lower floors, according to the officials.

Mustafa Sanallah, head of the Libyan National Oil Company, told a local television channel that explosions and an exchange of gunfire between the attackers and the building's security guards caused an unspecified number of deaths.

"The building was heavily damaged due to the fire. Smoke is everywhere," Sanallah said. "The gunmen attacked the lower floors with random shooting and explosions. It's a very violent attack."

Earlier, the Interior Minister of the U.N.-backed government, Brig. Gen. Abdul-Salam Ashour, said the attack was carried out by six gunmen and that the building was staffed when it took place.

A statement by the Tripoli-based government said security forces had "efficiently" dealt with the incident, "saving all employees and killing the terrorists," adding that security agencies are working to identify the attackers and "those behind them." The statement provided no further details.

The U.N. mission in Libya condemned the attack, describing it as "cowardly" and called on Libya to cease their "futile side conflicts" and unite to rid their nation of terrorism.

Monday's attack followed recent fighting in Tripoli between rival armed groups, which left at least 61 people dead. A cease-fire has been in place since last week.

Libya slid into chaos after the 2011 uprising that overthrew ruler Muammar Gaddhafi and led to his death. It is now governed by rival authorities in Tripoli and the country's east.

In its statement, the government said Monday's attackers exploited the recent spate of fighting between rival groups in the capital to "infiltrate (the city) and commit their crime."

"This is a time when we should have closed ranks and pooled our resources and arms to strike at and uproot this cancer (terrorism),"it added.