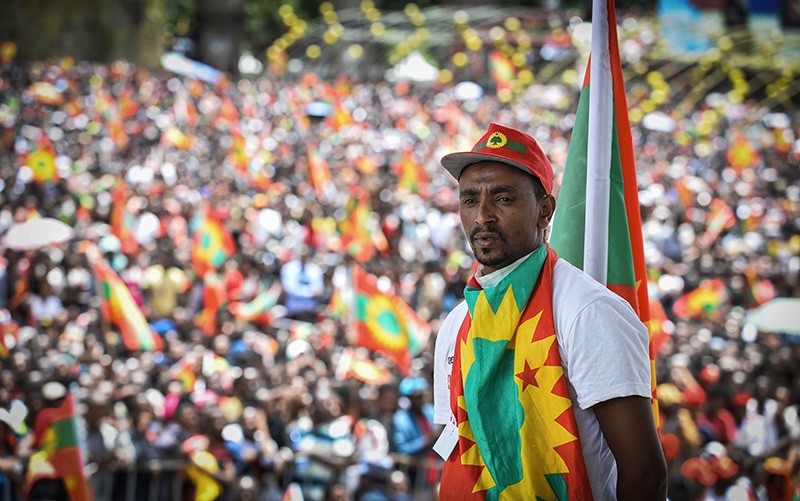 A man takes part in celebrations for the return of the formerly banned anti-government group the Oromo Liberation Front (OLF) at Mesquel Square in Addis Ababa, Ethiopia, on Sept. 15, 2018. (AFP Photo)
by Sep 17, 2018 12:00 am

Ethnic violence in Ethiopia left 23 people dead at the weekend, state media reported Monday, as protests against the killings gripped the capital Addis Ababa where an angry crowd gathered in the city center.

ENA reported that over 70 people had been arrested.

"These cowardly attacks represent a grave concern to the unity and solidarity of our people and will be met with an appropriate response," he said, without providing a toll.

On Monday an angry crowd gathered in central Meskel Square to protest against the killings which some blame on ethnic Oromo youth.

There was a heavy police presence in the city center while some roads out of the capital were blocked by other protesters.

The weekend killings followed the triumphant return from exile of leaders of the once-outlawed Oromo Liberation Front (OLF) rebel group who struck an agreement to lay down arms with reformist Prime Minister Abiy.

Addis Ababa is an ethnically-mixed city of around 4 million people, but is situated within the larger Oromo-dominated Oromia region.

Oromo-led anti-government protests that began in late 2015 helped bring about the resignation of Ethiopia's former leader and Abiy's subsequent rise to power.