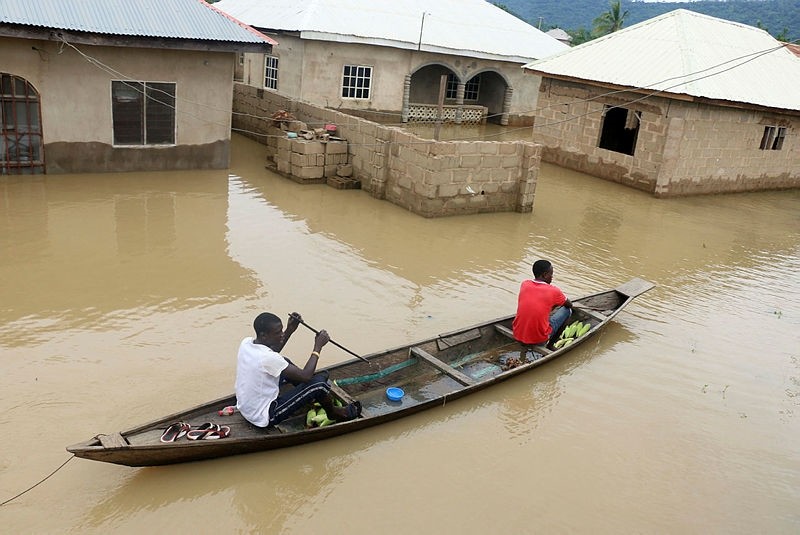 Residents steer a dugout canoe past flooded houses following heavy rain in the Nigerian town of Lokoja, in Kogi State, on September 14, 2018. (AFP Photo)
by Daily Sabah with Wires Sep 18, 2018 12:00 am

Nigeria has declared a national disaster in four of the worst-hit states after 100 people died in flooding triggered by heavy rainfall over the past two weeks, officials say.

Thousands of people in the affected areas have been displaced after facing severe flooding that swept homes away in some central and southern states. Heavy rains are continuing.

"Based on the available records at our disposal, a hundred people have died in 10 states as a result of the floods," Sani Datti, spokesman for the National Emergency Management Agency (NEMA), said Tuesday.

"The figure could rise as it is being updated," Datti added.

Many homes were swept away after Nigeria's two major rivers, Niger and Benue, burst their banks. NEMA warned that the severe flooding may worsen as the water levels rise in Kogi States capital Lokoj, one of the affected areas during the heavy rainfall season.

Officials have warned water levels resulting from heavy rains this year could be higher than those recorded in 2012, when 363 people died and more than 2 million were displaced.

Datti announced that emergency operation centers have been set up to conduct search and rescue missions and humanitarian support will be provided to those affected by the floods.

Nigeria's President Muhammadu Buhari announced on Twitter that he has approved $8.2 million in funds "for the procurement of medical and relief materials to meet the needs of the victims of the flooding."

The agency has recommended residents flee homes that are in flood-prone areas.