South Africa legalizes private use of cannabis by adults 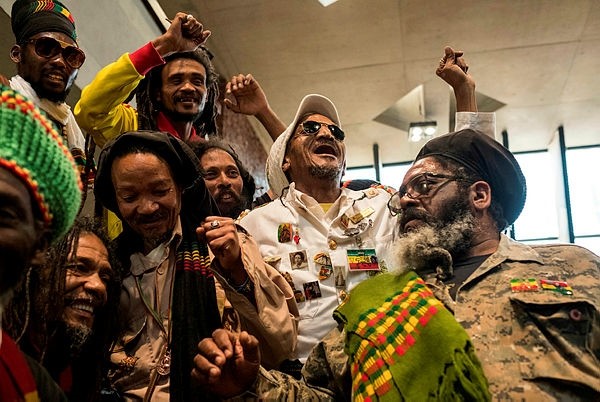 People celebrate after South Africa's top court ruled that personal cannabis use is legal on September 18, 2018, at the Constitutional Court in Johannesburg. (AFP Photo)
by Daily Sabah with Wires Sep 18, 2018 12:00 am

South Africa's Constitutional Court decriminalized the private use of marijuana on Tuesday after a provincial high court last year, involving Gareth Prince, found that the law against it was inconsistent with the country's constitution.

Prince says cannabis should be regulated in the same way as alcohol and tobacco. Government authorities have said cannabis is harmful and should be illegal.

The top court says an adult can cultivate cannabis in "a private place" as long as it is for personal consumption in private. It says the right to privacy "extends beyond the boundaries of a home."

The court says it would be up to a police officer to decide if the amount of marijuana in someone's possession is for personal consumption or dealing.

"It will not be a criminal offense for an adult person to use or be in possession of cannabis in private for his or her personal consumption," Judge Raymond Zondo said in handing down the judgment.

However, selling or supplying cannabis in public will remain illegal.

The Cannabis Development Council of South Africa called for the government to drop all charges of those who are have been found in possession of the drug.

Activists supporting the use of marijuana cheered after the court reached a unanimous ruling, chanting "Weed are free now."

The high court also legalized the growing of marijuana for private use in a unanimous ruling.